MEMPHIS, Tenn. — The Bluff City made the top 5 on a national list of the cities with the highest home burglary rates in the country.

Law enforcement authorities say one of the best ways to stay safe in a break-in is installing security cameras in and around homes. This tip is very important for investigators because when crimes are caught on camera, they can be solved much faster.

Memphis Police often post these types of home video on social media, asking for the public’s help in identifying the suspect. But these crimes are happening far too often in Memphis.

According to a new report, Memphis has the 4th-highest home burglary rate in the country with 847 break-ins per year. The report by SafeSmartLiving.com goes on to find most of these crimes happen in the middle of the day while people are at work or out running errands. 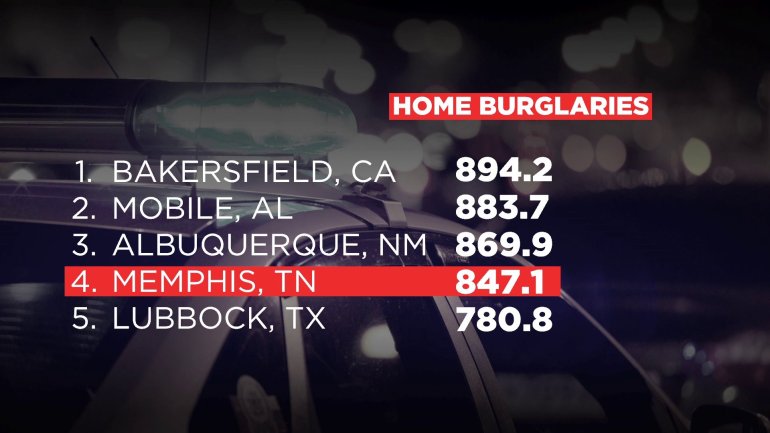 Remy Rose, who just moved to the area from Kansas, said this isn’t the kind of news she wanted to hear.

To protect homes, Memphis Police suggest residents install security cameras, use an alarm system or maybe even get a guard dog.

“Yeah, cameras would definitely be good, better than just having to have somebody at home making sure that nothing goes wrong,” Tim Bolden said. “Cameras are definitely better.”

Bolden said he bought an alarm system after someone broke into his home several years ago.

“It’d be a first step to keeping your stuff safe,” he said.

But in light of these new burglary numbers, he’s thinking about taking some other steps, like adding a doorbell security camera.

In addition to technical security blankets like cameras and alarms, police said another good, simpler defense is a nosy neighbor. They advised residents always to look out for people in their community.

MEMPHIS, Tenn. — A child was rushed to the hospital in critical condition Saturday evening after a crash on Interstate 40.

Memphis Police said just before 7:15 p.m. that officers were on the scene of the two-vehicle crash on I-40 near Covington Pike.

GATLINBURG, Tenn. (WATE) — Enjoy Fourth of July fireworks in Gatlinburg from wherever you are.

In a new twist, the Gatlinburg fireworks display will be from the top of the Space Needle.

Because of the COVID-19 pandemic, K.T. Robbins' friends and family had to put into play something that's becoming the new norm.