Memphis magazine is pulling its September issue and apologizing after cover art featuring Tami Sawyer was criticized as being offensive.

Memphis magazine is pulling its September issue and apologizing after cover art featuring Tami Sawyer was criticized as being offensive.

MEMPHIS, Tenn. — Memphis magazine has halted distribution of its September issue and the CEO of its publishing company issued an apology this weekend following backlash over a cover image of a county commissioner and mayoral candidate.

But commentary on social media and online sources characterized the drawing of Sawyer in particular as offensive, and promoting racist stereotypes.

“Upon review of this piece, all I can say is that I’m deeply upset and saddened that we must still contend with blatant racism, sexism, body shaming and an overall abysmal disrespect from some of our most trusted media outlets in this century and climate,” said Deidre Malone, president of the Memphis chapter of the NAACP in a Facebook post.

Sawyer said in a Facebook post that she was “shocked, disappointed and disgusted” by both the cover art and accompanying article.

Ellis, on Facebook, referred to Sawyer as “the black female” who was “monstrously obese,” and said he’d submitted several versions of Sawyer’s caricature to the magazine’s editor, art director and publisher.  “More than that I cannot do, not (sic) should I. Nevertheless, I am unhappy about having provoked ill feelings in you.” 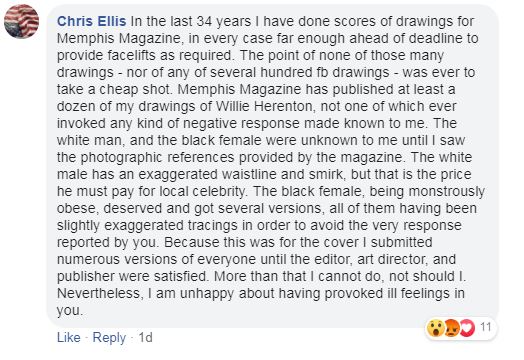 Saturday, the magazine published an online post acknowledging the negative reception but saying the art followed a long tradition of satire in the magazine. “It was not our intention to demean any of the candidates or to satirize one more than the others, but we are sympathetic to the perceptions our readers have shared,” it read.

The next day, Anna Traverse, CEO of parent company Contemporary Media, published a stronger apology under the heading “We Failed Memphis.” Traverse said she had known Sawyer since both were in high school.

“The first thing to say, and the only thing I ask you to hear if you do not read past this first sentence, is that I am profoundly sorry for the cover of the September issue of Memphis magazine and the pain it caused,” Traverse wrote. “Our editorial team has released a statement already, referencing the history of political caricature. That statement was inadequate. This is not about that history, or about our attempts to explain why our team approved the cover. This is about the fact that we published a magazine whose cover image was taken, justifiably, as playing into a long history of racist, demeaning tropes, a history of marginalizing African-American women in particular.”

Though the issue had already been mailed to subscribers, Traverse said the image had been removed from the magazine’s website, print copies were being removed from retail shelves and remaining newsstand copies would not be delivered.

Monday, the new chairman of the Shelby County Board of Commissioners, Mark Billingsley, called the magazine cover racist and demeaning toward Sawyer, his colleague on the commission.

“It is our right as Americans to challenge any candidate or elected official on their political positions and direction as a leader. What I saw on the cover of Memphis Magazine was not an effort to highlight political positions or issues.  It was caricatures to hurt and divide along racial lines,” Billigsley said. “Memphis Magazine has enjoyed a long-history of best representing our community and we have celebrated those successes many times.  Unfortunately, this effort fell far short of what I expected from Memphis Magazine or any periodical.”

The Memphis mayoral election is Oct. 3.

Watch the press conference below.

Petition to change name of park to honor man who …

Petition to change name of park in honor of coach

95-year-old woman found after getting into SUV

‘Ludacris wanted you to illustrate his book’