MEMPHIS, Tenn. — A Memphis couple tried to be generous with a stranger last weekend, and it almost ended up costing them their lives.

The incident started at Southland Casino Gaming and Racing in West Memphis, Arkansas, in the early morning hours of Oct. 5, when a Memphis couple met a man who called himself “Zoe.” They agreed to give him a ride home to Memphis, but things took a turn once they crossed the river.

The man directed them to a South Memphis intersection at the corner of Ketchum and Imogene, pulling a gun on them and demanding they get out of the car.

It was there, in a school zone with children’s toys just feet away, that the man took the couple's money and valuables, then drove off in their car. 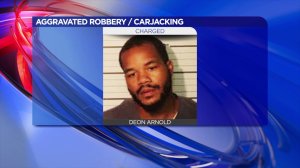 Two days later, the couple picked out 26-year-old Deon Arnold in a police lineup. He was arrested and charged with two counts of aggravated robbery and carjacking.

WREG reached out to that couple, but have not heard back.

We tracked down Arnold's home, located off busy Poplar Avenue about five miles away from where he’s accused of carjacking that couple, but no one answered.

For now, Arnold remains out on bond. He’s due in court next Tuesday.

We reached out to Southland about the incident, and they referred us to their website for a guide to safe and responsible gaming.

MEMPHIS, Tenn. — The News Channel 3 Weather Experts are tracking multiple Tornado Warnings across the Mid-South, just a few hours after a tornado touched down in Jonesboro, Arkansas.

Check out our latest edition of "Coronavirus Alert: Health Check"

More information on stories featured in the episode:

MEMPHIS, Tenn. — People living in Jonesboro are being put under a curfew after a tornado tore through the area on Saturday afternoon.

In a tweet from Arkansas State University, the city says it will begin at 7 p.m.

Four people in the Mid-South reportedly died from coronavirus

Four people in the Mid-South reportedly died from coronavirus