MEMPHIS, Tenn. — Police in Helena-West Helena, Arkansas arrested a man they say is responsible for robbing a post office and a bank last month.

Brandon Taylor, 38, was first arrested Oct. 1 for auto theft, but posted bond and was released the same day. Police arrested him again days later on robbery and aggravated robbery charges. 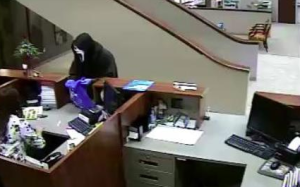 On Sept. 16, someone robbed a post office in the city while wearing a mask from the movie “Scream.” Employees lockers themselves in the back, leaving a customer out front with the suspect, who was unable to open the cash drawers and got away with nothing.

Three minutes later, police said the same man walked into a Southern Bancorp Bank nearby and got an undetermined amount of cash from tellers before getting away in a Ford Taurus.

On Sept. 27, a man walked into the same bank wearing a different mask — this one a “scary clown” — and demanded money from the tellers at gunpoint, then drove off in a white Ford Taurus with Tennessee tags. Police believe it was the same person as in the Sept. 16 robbery.

Police say they found a Ford Taurus that matched the description of the getaway car, parked in a yard on Phillips Highway. While checking it out, they ran the plates on an SUV at the house, which came back to a different vehicle that had been stolen in Memphis.

Taylor was sitting inside the SUV. He told police he’d been using the tag to avoid getting stopped by police. He was arrested, charged and posted bond.

After collecting more evidence, police arrested him again Friday, charging him in the robberies. He is currently being held at Cross County Jail, awaiting his first appearance in Phillips County Circuit Court.

The incidents are still under joint investigation by the Helena-West Helena Police Department, Arkansas State Police, the United States Postal Inspection Service, and the FBI.

WASHINGTON (NewsNation Now) — President Donald Trump granted a full pardon to former White House aide Steve Bannon as part of a wave of pardons and commutations he issued during his final hours in office.

Trump pardoned 73 people and commuted the sentences of an additional 70. At least 50 are drug related.