MEMPHIS, Tenn. — What appears to have been a robbery leaves a man in his early 80s dead and police on the hunt for a killer.

He had been in the record business for decades and a stable of that neighborhood for years. 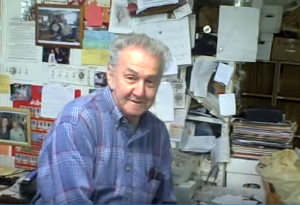 Tragically his life was taken Thursday night when police say someone barged into the store on Highland, robbed the place and then opened fire.

When detectives arrived, they found Gibson inside just feet from the front door.

“He was a sweetheart,” said close friend Jim Blake. “He never had any trouble before.”

Neighbors said a lot of kids hang out around the shop, which is a cash-only business. The victim reportedly lived in an apartment above the shop.

Gibson knew everyone in the neighborhood and helped who he could. He was described as a “mild manner little guy that never hurt anybody.”

Family sent this statement, “Jerry was a sweet man and the brother of my father, Lowell Gibson, who founded Gibson Donuts. We come from a large, warm and loving family. Jerry had 11 brothers and sisters. Our collective Gibson hearts are broken.”

Police don’t know who the suspect is or where they are. They canvassed the area for hours and pulled video from nearby stores, hoping to put the pieces together for a grieving family and community.

If you know anything about this case, call CrimeStoppers at (901) 528-CASH.

From QB to TE, the motivation behind Caden Prieskorn’s …

Four amendments you will vote on in TN Nov. 8 election

Cheatham Co. teacher to compete on Wheel of Fortune