GRANT PARISH, La. — Louisiana authorities have charged the  man wanted in connection with the slaying of 20-year-old Samuel Smith, who was camping at Chewalla Lake in Marshall County, Mississippi, according to station KALB.

Fletcher was seen in surveillance video shortly after the killing. Police issued an arrest warrant for Fletcher shortly after Smith’s body was found by a fisherman in  Chewalla Lake in Marshall County on July 29.

Smith’s body appeared to have signs of trauma on his head.

Fletcher was seen on surveillance video shortly after the murder took place.

Marshall County law enforcement officers searched  through thousands of acres of woods in hopes of locating Fletcher. The National Guard and the state police were used throughout the search. 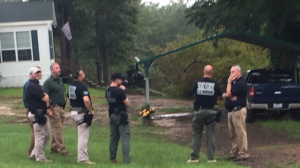 Based on the autopsy results, authorities think the suspect drowned Smith three or four days before his body was found.

Fletcher has his initial court appearance this morning and is being held on a $1 million bond.

MEMPHIS, Tenn. – Peyton Manning, the NFL’s only five-time Most Valuable Player and a 14- time Pro Bowl selection, will be the guest of honor and will receive the AutoZone Liberty Bowl’s most prestigious recognition, the Distinguished Citizen Award, on June 7, 2020. Manning’s father, Archie, received the Distinguished Citizen Award in 2016. The Mannings are the first father-son recipients of this award from the AutoZone Liberty Bowl. Peyton Manning,…