MEMPHIS, Tenn. -- Prominent Memphis businessman and rape suspect Mark Giannini will stay behind bars as he awaits another trial.

A judge finalized that decision on Wednesday after Giannini’s defense tried to get his bond set at less than $3 million.

The defense was arguing bond should be lowered after Giannini was found not guilty of rape on a different case last month.

"The judge knows the facts and the circumstances in this case and makes a ruling, and we live by it," said Defense Attorney Steve Farese.

They asked Judge Mark Ward to reverse his decision made last year. He revoked Giannini`s bond after he was accused of trying to coerce and bribe witnesses in the rape case.

This was the third bond hearing since Giannini was found not guilty last month of raping a woman who said she went to his house for a job interview.

Giannini has a drug trial and two more rape trials coming up.

"Each case stands on its particular set of facts [and are] completely different," said Farese.

But Farese said he believes the state is trying the easiest cases first, with that first one ending in an acquittal.

"That`s generally what prosecutors do. We've had confidence from day one."

One piece of evidence that played a role in Judge Ward`s bond decision was a stack of mail that Giannini`s friend sent to him in jail. It contained personal information about people connected to the cases.

The judge said he didn't believe allowing bond would assure Giannini would show up to court or protect the public`s safety.

He said he`ll reconsider bond at the end of the next trial.

Giannini`s defense attorneys said they`re not sure when he`ll appear before a judge again, but his drug trial is set for early September and one of the two rape trials is set for the end of October. 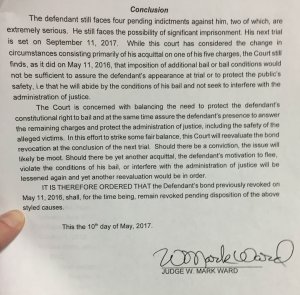 Police in the north-central state of Guanajuato said the attack occurred in the city of Irapuato. Three of the seven wounded were reported in serious condition.

Sources tell News 2's Chris Bundgaard that the Capitol's bust of Confederate General Nathan Bedford Forrest will be on the agenda. Governor Lee confirmed this in his weekly briefing on Wednesday afternoon.

NEW YORK (AP) — A New York appeals court cleared the way Wednesday for a publisher to distribute a tell-all book by President Donald Trump’s niece over the objections of the president’s brother.

The New York State Supreme Court Appellate Division said it was lifting a restraint that a judge put on Simon & Schuster a day earlier that would have blocked distribution of “Too Much and Never Enough: How My Family Created the World’s Most Dangerous Man.”

One dead, two injured after vehicle collides with tractor-trailer near Memphis airport

Woman, boyfriend arrested after allegedly attempting to drown her father in bathtub

With COVID cases rising, Memphis alternate care site ready for call to use

Family fights for justice after mother of five shot by boyfriend