PERRIS, Ca.  — The 17-year-old girl who called police to report her allegedly abusive parents in Perris, California, said the house the family lived in smelled so badly that she could barely breathe, and she thought she and her 12 siblings might need to go to the doctor.

And when she struggled to remember the address of the home, the 911 operator asked her if she was around the corner from her house.

That chilling 911 call was made public Wednesday as part of a preliminary hearing in the case against David and Louise Turpin, the California couple accused of holding their 13 children captive in a “house of horrors.”

Prosecutors say the couple beat and tortured their children, kept them chained to their beds and starved them — all while the family dogs were kept clean and well-fed.

They were arrested on January 14 after their 17-year-old daughter escaped from a window and called 911 on a deactivated cell phone. The Turpin siblings are comprised of six minors and seven adults, ranging in age from 2 years old to 29.

Despite the horror of the 911 call, the girl’s voice sounded remarkably calm and clear while relating her experience. But the call, as well as police who responded to the scene, provided several disturbing new details from the home and the degree to which the parents controlled their children’s lives.

“I can’t breathe because of how dirty the house is,” the Turpin daughter said on the call. “We don’t take baths. I don’t know if we need to go to the doctor.”

Accounts of abuse and starvation

Other Turpin children told investigators they were abused.

A 14-year-old girl said Louise Turpin threw her down the stairs when she was caught in her mom’s room, investigator Brett Rooker of the Riverside County Sheriff’s Office testified.

“She said she was terrified of her mother,” he said.

An 11-year-old girl said that Louise Turpin would often punch them with a closed fist and hit her with an open hand, Riverside County Deputy Sheriff Daniel Brown testified. The girl said that sometimes, her mother pulled her hair so forcefully it would lift her off the ground, Brown said. 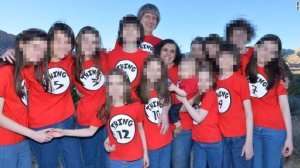 The girl said she was “always hungry,” he further testified. The children were fed jalapeno baloney sandwiches while the parents ate Jersey Mike’s, pizza and fries, he said. The girl said Louise Turpin would buy apple juice but the children weren’t allowed to drink it. She kept pie in the fridge or pantry until it became moldy and then threw it away.

A doctor who treated the family said the 11-year-old girl was in the worst condition when the examined her, Patrick Morris, Supervising Investigator for Riverside County District Attorney, testified.

She had a body weight percentile of .01 and her mid arm circumference was equal to that of a 4.5-month-old baby, Morris testified. The doctor said she had psychosocial dwarfism, stunted growth due to living in an environment that is abusive or neglected.

The 15-year-old boy had difficulty walking, vitamin D deficiency, and visible scoliosis. He told the doctor that he wanted to kill animals and could predict the future, Morris testified.

In their room 20 hours a day

The 17-year-old Turpin daughter who made the 911 call weighed about 97 pounds with a BMI of 2.2% when doctors first examined her, Morris said.

In other parts of the call, told the operator that her parents were abusive and had chained up two of her sisters, and that she thought her father had guns in the house. She also said she hadn’t taken a bath in almost a year.

Riverside Deputy Manuel Campos, who responded to the 911 call, testified on Wednesday that the girl appeared much younger than 17.

The girl was shaking on the call and “scared to death” from the daring escape out of the window, Campos said. She said that she was kept in the room with her sisters for about 20 hours a day, and that she was only allowed to leave the room to eat, use the restroom and brush her teeth, Campos said.

If she broke the rules, she would be disciplined in the form of knocking on the head, pulling of hair, or being smacked in the face. After she watched a Justin Bieber video on a cell phone, her mother choked her, she told Campos.

In addition to the physical abuse, there was a sexual incident with her father, the girl told police. She said her father pulled her pants down, grabbed her and put her on his lap. She tried to push him away, and pulled her pants up, Campos said.

He also tried to force kisses on her mouth, she told Campos, and this happened about 10 times. The girl said her father told her not to tell anyone, Campos said.

SAN DIEGO, Calif. - Most people who break into a bank do it to get their hands on some money.

A man in San Diego said he did to get his hands on a Hot Pocket.

Over Memorial Day weekend, Peter Makredes carried his cooler full of food and drinks to a park in Las Vegas.

But he wasn't there to grill, he was there to run -- and the food served as his fuel.

FAYETTEVILLE, Ark. (KFSM) -- An Arkansas nurse, who traveled to New York City to help a hospital overwhelmed with COVID-19 patients, has returned home.

Several weeks ago, we shared with you Erin Courtway’s story, which includes a video of her crying in the hospital bathroom on a break. The video, which was shared thousands of times, was an honest testimony of life inside the ICU.

I-40 at Chelsea closed after man killed, toddler injured in accident