MEMPHIS, Tenn. — A Memphis man is behind bars after being accused of breaking into the same home twice.

Memphis Police said a woman away on vacation was still able to watch what was happening inside her home on her phone. The homeowner’s high-tech surveillance system helped police catch a man who they said is a two-time thief.

Police said they were waiting the second time and were able to catch him red-handed. Now, Rodrick Smith is behind bars and facing two counts of aggravated burglary. 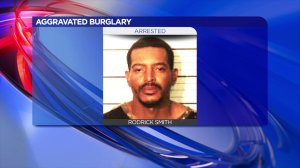 “To be able to get good footage of the thieves in the act, that helps to solve crimes very quickly,” Memphis Police spokesperson Louis Brownlee said.

Detectives said the home video system alerted the victim to what was happening as she was away on vacation. This past Saturday, she received a message that someone was inside her Glenview home, and he was able to get away.

Four days later, investigators said the same brazen burglar was at it again.

This time, after getting an alert, the homeowner was able to call for help while the crime was happening.

“Homeowners can fortify their home with home security systems, lights around their house, cameras, they can have dogs outside,” Brownlee said.

Brownlee said what’s  just as beneficial is neighbors looking out for neighbors.

“One of the most important things you can have to fortify your home is that nosey neighbor,” Brownlee said.

Police said Smith didn’t surrender without first trying to get away. While detectives were still filling out the incident report, they said Smith was returning to the home to collect the stolen items he left behind.

After trying to outrun police, he was eventually caught.

MEMPHIS, Tenn. — An active night for Memphis police as they responded to a number of shooting calls all within a matter of hours.

In North Memphis, first responders were called to Davis Street and found two victims suffering from gunshot wounds. They were rushed the hospital in serious condition.

MEMPHIS, Tenn. -- Residents of the Peppertree Apartments in Whitehaven were treated to a different kind of light show Sunday night as a wall of orange flames lit up the sky.

The Memphis Fire Department says two units were damaged after fireworks landed on the roof of one of the units.

MEMPHIS, Tenn. - - Shelby County health officials are considering shutting down gyms again as COVID-19 cases continue to rise. The county has already decided Tuesday to shut down many bars.

"We've reached a pivotal point and we can either continue to try to flatten the curve or we can continue to trend upward," Dr. Alisa Haushalter said. "There's new research that does show that there's transmission within gym facilities."

How risky is dining out during the COVID-19 pandemic?

Coronavirus in Arkansas: Testing down across Arkansas after holiday weekend, spike in hospitalizations