MEMPHIS, Tenn. — A woman accused of running over a man with her van turned herself in after pictures of the van she was driving were shared on social media.

A witness gave those pictures to police after chasing her vehicle down. 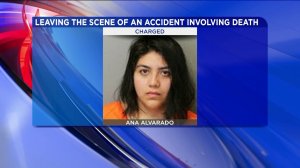 Ana Alvarado, 22, is charged with leaving the scene of an accident after a deadly wreck that killed a Mississippi man Saturday morning.

It happened at Pleasant Hill Road and Imagination Drive in Southeast Memphis, where Timothy Hopkins was trying to help people who had been in an accident.

Police say he was standing in the road directing traffic when Alvarado hit him and killed him.

Terry Jefferson pulled up to the scene right after it happened.

"I was about to get out of the car, another person told me go chase that van down because that van just hit this man," Jefferson said.

He caught the vehicle down the street at Shelby Drive.

"I done caught them right at the light and snapped me five good pictures, and gave them to the police officers," he says.

"You know, you can't hit nobody like that and just leave. You know, that man got a family, grandkids, or a wife and kids. You can't do that," Jefferson said.

Police say Alvarado turned herself in the next day.

"That lady came and killed him and kept going. She didn't have no feelings for the man, you know? That's just wrong," Jefferson says, "He was just trying to do a good deed."

Hopkins' brother is calling Jefferson a hero and thinks Alvarado's charges need to be more severe.

So far this year, there have been 220 murders in Memphis. The city's 247 homicides, a slightly different statistic than murder, is a record.

MEMPHIS, Tenn. — School bells are expected to ring again at Shelby County Schools come early January, as the system begins to return students to class in phases. Parents have until the end of this month to choose in-person or virtual, but some have already decided.

If all goes according to plan, SCS student will return to the classroom at the start of the new year. Some people have already made the decision as to whether or not their students will go back to class or not.

MEMPHIS, Tenn. -- Virtual learning is the new norm for thousands of students in the Memphis area. WREG's April Thompson spent the day with families and teachers as they maneuver the successes and challenges of this unprecedented way of educating children.

The day starts early for 10-year-old Dey-Lan as the fifth grader gets ready for school.

‘I was so scared’: Pumpkin thrown off overpass smashes through student’s windshield

Mid-South man indicted on murder charge after teen gunned down