Greer said seven or eight people, including several children, were trapped on the third floor and stranded on a balcony.

“My mom ran and told me, ‘There’s people, their house is on fire, they need help,'” Greer said. “You could not go to the front door. The front door was engulfed in flames.”

Adrenaline pumping, he climbed up to the balcony. 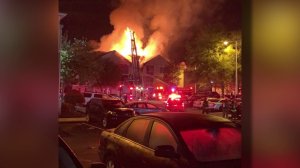 “The only thing going through my mind was God, and just, help these people. I didn’t see anything else. I didn’t see the fire, I just ran right through it,” he said.

He said he was carrying them on top of the balcony, one foot on and one hand off, passing them off to people on the ground.”

Everyone got out safely.

The fire left a gaping hole left in the complex. Greer said he was glad to help but can’t help but think, “What if?”

“That’s why I can’t sleep now. What if I wasn’t there?” he said. “It’s just hard. Hearing those kids scream like that.”

The 31-year-old says his life is now changed, and he’s not taking it for granted anymore.

“I was just doing what God told me to do. I didn’t feel like it was a duty. I just felt like it was the right thing to do.”

The humble hero had a message for others: If you see someone needing help, don’t pass them by.

“Or if you can’t help them, try to find somebody who can help them. Because that’s what my mom did, she ran back and told me, ‘Hey.’ She knew I was going to do something.”

Two people were injured in the fire. The fire department said it started with children playing with matches on a balcony.

CORINTH, Miss. - - Two middle school students are facing serious charges after police say they were caught with guns on campus. It happened at Corinth Middle School in Mississippi Wednesday afternoon. According to the school district, administrators were told a student had a gun. School officials haven't said where that tip came from but claim they immediately detained the student and called 911.

Corinth police say the young man then ran from the campus and threw the weapon down in a nearby field. Officers arrived minutes later and say they quickly found the student and the gun. After further investigation, police say a second student was also found with a gun. Officers took both young men to the juvenile detention center.

MEMPHIS, Tenn. — Memphis Police are investigating an accident on Interstate 40 where a pedestrian was hit and killed, late Wednesday night.

MPD said a pedestrian was struck and has been pronounced deceased. They said the driver of the vehicle arrived at Appling Farms Station and advised that she thought she had struck someone on the interstate.

CALMAR, Alberta (NEXSTAR) – A man who unintentionally bought two tickets for the same draw had to "split" the $5 million jackpot with himself, the Western Canada Lottery Corp said in a news release Tuesday.

Andrew Burke, of Calmar, Alberta, would have taken home the same amount either way after winning the September drawing, but, since he played two tickets with his same lucky numbers he wound up with two giant checks, each for $2.5 million.

Applications are down for Tennessee Promise scholarship opportunity

Mississippi officers get creative to free deer stuck in fence

Police focus on Lamar Avenue corridor as hotspot for crime