SUTHERLAND SPRINGS, Texas — If not for the brave actions of two residents during the attack at the First Baptist Church in Sutherland Springs, the death toll could have been higher.

According to authorities, the gunman entered the small church in the rural town east of San Antonio, firing with an assault weapon at the congregation attending the morning service.

A local resident grabbed his own rifle and engaged the gunman, said Freeman Martin, the regional director of the Texas Department of Public Safety.

“The suspect dropped his rifle, which was a Ruger AR assault-type rifle and fled from the church,” said Martin, adding that the resident then chased the gunman.

“What do you say to the man who stepped up when he heard the gunshots? I’d say he’s a hero,” Wilson County Sheriff Joe Tackitt, Jr. told CNN’s Chris Cuomo on Monday. “I don’t think there’s any question about that. Had he not done what he did, we could have lost more people.”

Another man,  Johnnie Langendorff, was reportedly driving by the scene when he saw the gunfire between the resident and accused shooter. 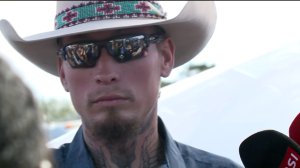 During an interview on Monday, Langendorff told reporters, the resident told him what had happened and he immediately jumped into action.

He said the two were speeding down the road, trying to keep up with the suspect.

“We were driving at a pretty high rate of speed, going in and out of traffic. I was trying to keep up with him because he had got a little bit of a head start from between him leaving and the gentleman crossing the road to get  in my truck. So we really had to catch up with him,” he said.

He admitted there were some close encounters during that 11 mile trek, but thankfully no one was hurt.

They were able to give police dispatch their location and what direction they were headed.

“The vehicle was in sight and I was picking up, getting closer and closer to it. We hit about 95 (mph) … trying to catch this guy until he eventually lost control on his own and went off into the ditch,” Langendorff reporters.

“The gentleman that was with me got out and rested his rifle on my hood and kept it aimed at him (the shooter), telling him to get out. There was no movement, there was none of that. I just know his brake lights were going on and off, so he might’ve been unconscious from the crash or something like that. I’m not sure.”

Langendorff felt the suspect, who crashed his pearl-colored Ford Explorer near the county line, “just gave up.”

When police arrived about five minutes later, they approached the suspect’s vehicle and found the gunman inside dead of a bullet wound. He was later identified as Devin Patrick Kelley.

According to CBS News, police now believe the suspect died from a self-inflicted gunshot wound.

The shooting was a horrific tragedy, Landendorff said, but he hopes the families of the victims can sleep better knowing the shooter “was taken care of.”

And he has no regrets about throwing himself into such a dangerous situation.

“He just hurt so many people, and he just affected so many people’s lives,” he told KSAT. “Why wouldn’t you want to take him down?”

MEMPHIS, Tenn. — If you look on Google Maps, you won't notice a change to Jackson Avenue, but take a walk through the Vollintine-Evergreen area and you'll notice it has a new name: Black Lives Matter Avenue.

At least, it temporarily has a new name.

NASHVILLE, Tenn. (WKRN) – The Tennessee Department of Health has confirmed additional cases of COVID-19 across the state on Friday, July 3, 2020.

MEMPHIS, Tenn. --- Memphis police say they are getting hundreds of calls about fireworks being set off illegally.

Memphis police report that between April 1 and June 29 this year, they received 963 complaints about fireworks. The same time last year, just 86 complaints. That's a 1,020% increase.

Watch fireworks online: How to enjoy 4th of July amid coronavirus pandemic

Watch fireworks online: How to enjoy 4th of July amid coronavirus pandemic