NASHVILLE, Tenn. — Governor Bill Haslam has vetoed legislation that would have made the Bible the official book of the state.

In a letter to the Speaker of the House Beth Harwell, Haslam sided with the Attorney General who said last year that designating the Holy Book as the Tennessee book would violate the Establishment Clause of the First Amendment.

The clause states “no preference shall be ever be given, by law, to any religious establishment or mode of worship.”

He went on to say that he personally felt the designation would “trivialize” the Bible, WTVF reported.

“My personal feeling is that this bill trivializes the Bible, which I believe is a sacred text,” Haslam wrote. “If we believe that the Bible is the inspired word of God, then we shouldn’t be recognizing it only as a book of historical and economic significance. If we are recognizing the Bible as a scared text, then we are violating the Constitution of the United States and the Constitution of the State of Tennessee…”

The entire letter is below. 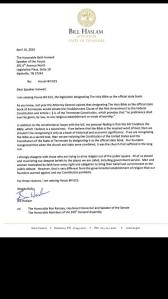 Questions linger after teen gunned down in traffic

One critical after shooting at North Memphis store

One dead after shooting in Orange Mound

One dead after shooting in Orange Mound

Best tools to give as gifts

Best smart home gifts for everyone in your life