Skip to content
Breaking News
Breaking News
Continuing coverage of the coronavirus in the Mid-South
Watch Now
Watch Now
Live at 9
This is an archived article and the information in the article may be outdated. Please look at the time stamp on the story to see when it was last updated.

MEMPHIS, Tenn. -- Timothy Alexander is passionate about the price he pays at the pump.

When we found him filling up his car at a North Memphis gas station, he didn't think much of Governor Bill Haslam's proposed 7 cent gas tax increase.

On Wednesday, the governor announced a plan that would effectively clear a huge $10 billion backlog of road projects across the state. In order to do that, he's having to make some changes to your taxes.

"What we are trying to do is address some infrastructure needs and not be burdensome to our average citizen," the governor said. "To our average citizen it will cost about four dollars a month. We tried to balance that with $270 million in tax cuts." 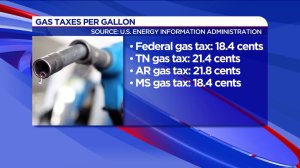 It would be the first gas tax increase in almost 30 years.

The good news for consumers-- Haslam also wants to cut grocery tax by one half a percent to 4.5 percent and cut the hall income tax 1.5 percent.

Tennessee Senator Lee Harris released a statement saying, "While we are waiting to receive more details...the Governor's remarks about infrastructure and public transit are initially encouraging. I am also initially encouraged by the cut to grocery taxes..."

The Department of Homeland Security warned the faith-based community ahead of Passover and Easter about an "increase in online hate speech intended to encourage violence or use" the ongoing coronavirus pandemic situation as an excuse to spread hatred.

In a letter to community members Wednesday, the department reminded houses of worship to review security plans and procedures ahead of congregant gatherings, acknowledging that many people are worshiping remotely at this time.

Before the coronavirus pandemic, Jennifer Knox would walk into her bar and soak in the sounds of people chatting while sipping on their drinks and listening to local musicians strum along on their guitars.

Now, her restaurant, The Sand Bar -- located in Tybee Island, Georgia -- is quiet, with no customers or employees in site.

(CNN) -- As the coronavirus pandemic intensified, Leilani Jordan insisted on going to her job as a clerk at a Maryland grocery so she could help seniors, her mother said.

She had challenges of her own, as a worker with cerebral palsy. But as shoppers around the country raided shelves for necessities in early to mid-March, Jordan wanted to make sure the elderly got theirs.

Baking during a pandemic can reduce stress and provide comfort

CarMax to furlough more than 15,000 associates

Surgeon General: Here’s how you can make a cloth mask today in just a few easy steps

Baking during a pandemic can reduce stress and provide comfort

CarMax to furlough more than 15,000 associates