OSCEOLA, Ark. — Funeral arrangements have been made for the Mid-South father and son killed in the duck boat that capsized in Missouri.

Steve Smith, 53, and 15-year-old Lance Smith were among the 17 people who died. They were on their annual family trip to Branson from Osceola, Arkansas.

Pam Smith shared with CBS News her final words to her husband Steve before the boat he and their two kids were on capsized:

Steve and Pam Smith’s 14-year-old daughter Loren was also on the boat. She survived.

“It’s like losing one of your best friends,” Loren Smith said. “One of the closest best friends you’ll ever separate from.”

She says what started as a blue-bird day, turned into a sky full of clouds she describes as evil.

“The wind started picking up,” she said. “I saw a tree fall down in the background and told my brother. He didn’t notice it. I was freaking out.”

As murky water flooded their boat, she fought to make it back to land, not knowing she’d be the only one in their family to do so.

Pam and Steve had been married nearly three decades. Their family makes the five-hour trip from Osceola to Branson every summer.

Their family’s well known in the community as educators and church-goers.

“Lance, he was recently baptized,” Pam Smith said. “This past Sunday, he preached. And I was so proud. And his little mini sermon was on being a good example.”

They say they’re going to need a lot of prayers to get through this tragedy.

On Monday morning, the sunken boat was raised from Table Rock Lake and pulled to shore.

The website for a tour company whose boat capsized in Missouri says the business is offering to pay for medical and funeral expenses for those aboard.

Thirty-one people were on the amphibious duck boat when it capsized Thursday evening on choppy waters during a storm. Seventeen died. The National Transportation Safety Board and other agencies are investigating.

The website for Ride the Ducks Branson says the company is offering to pay for all related medical bills and funeral expenses, to return all personal items from the rescue scene, and to help with any related travel or accommodations that families need. The company also says it’s providing grief counseling for its own employees.

The page says the company’s leaders remain deeply saddened, but the company cannot comment further on orders from the NTSB.

The boat , which was submerged in 80 feet of water, went down Thursday evening after a sudden thunderstorm generated near-hurricane strength winds.

Divers attached a sling to the boat, then raised the vessel. Once it was brought to the surface, it was drained, Coast Guard Capt. Scott Stoermer told reporters.

The vessel will be loaded onto a vehicle and transported to a facility where the National Transportation Safety Board will take custody of it, Stoermer said.

Nine of the people who died belonged to one Indiana family . Others killed came from Missouri, Arkansas and Illinois. Seven survivors were taken to a Branson hospital, where the last patient was discharged Sunday. 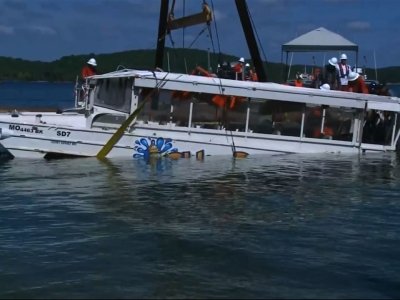 Mandi Keller, who was not aboard the vessel, told The Kansas City Star that the survival of her 15-year-old daughter, Gillian Collins, and eight other relatives was a “complete miracle.” They were the only family aboard in which no one died.

Missouri State Highway Patrol chaplain Steve Martin said the family’s survival was “remarkable” and that there is no explanation for it. He said the relatives, who found safety in different ways, were suffering from survivors’ guilt.

Divers have recovered a video-recording device that was aboard the boat, although it’s unclear whether it was working when the boat capsized or whether any data can be retrieved, including audio. The recorder was headed to the NTSB lab in Washington, D.C.

Former NTSB Chairman James Hall said over the weekend that the World War II-era duck boats should be banned for commercial recreational use because they aren’t safe in bad weather.

Steve Paul, owner of the Test Drive Technologies inspection service in the St. Louis area, said he issued a written report in August 2017 for Ripley Entertainment, which owns Ride the Ducks in Branson, after inspecting two dozen boats. In the report, he explained why the vessels’ engines — and pumps that remove water from their hulls — might fail in inclement weather.

Paul said he would not know if the boat that sank is one that he inspected until it has been recovered from the lake.

Ripley Entertainment, which owns the duck boat business in Branson, has not responded to questions about Paul’s concerns.

Ripley has made few comments since Friday, except to say that the accident was the company’s first in more than 40 years in Branson.

MEMPHIS, Tenn. — After 2,400 vaccines were thrown away in Shelby County, leading the state to ban the health department from distributing the vaccine, a WREG investigation reveals the rationale provided by county leaders is not adding up.

The city, which took over vaccinations, says it's trying to correct a lot of inefficiencies from before. But we're still wondering, how did this happen in the first place?

Senate parliamentarian Elizabeth MacDonough, the chamber's nonpartisan arbiter of its rules, found the minimum wage hike must be dropped from the COVID-19 bill, Democratic Senate aides Thursday told the Associated Press. Democrats were on track to push a sprawling COVID-19 relief measure through the House on Friday, with an initial version of a $1.9 trillion package that includes a minimum wage increase.

(NEXSTAR) – Heinz, which is known for the slow-pouring nature of its ketchup, now has a website to match – the new load time is 57 minutes.

With barbecue season in the not-to-distant future, Heinz is inviting people to visit Heinz.com for a chance to win.

US carries out airstrikes against Iranian-backed militia facilities in Syria

Fauci: Whatever vaccine is available, take it

US carries out airstrikes against Iranian-backed militia facilities in Syria