GUANGDONG PROVINCE, China — The Chinese city that boasted the largest number of dinosaur eggs in the world  added a new batch to its impressive collection.

The city, which calls itself the “Home of Dinosaurs,” won a Guinness World Record for the world’s largest collection of dinosaur eggs at its museum in 2004.

Huang Zhiqing, deputy director of the Heyuan Museum, told CNN that it was the first time the fossils had been discovered in the bustling city center.

Major road repair work was halted as a team of researchers and construction workers jumped down into a ditch to dig out the fossils.

Nineteen of the eggs were completely intact, with the largest measuring as much as 13 centimeters (5 inches) in diameter, Huang said.

Researchers said they would continue to examine the fossils to determine which dinosaur species they belonged to.

Most of the eggs in the museum’s existing collection belong to oviraptorid and duck-billed dinosaurs, which roamed the earth 89 million years ago.

Nearly 17,000 dinosaur eggs have been uncovered in the city since the first group of fossils was found in 1996 by children playing at a construction site, the China’s official news agency Xinhua reported. 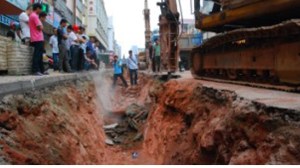 MEMPHIS, Tenn. -- Hundreds of people are losing their jobs after a devastating announcement from a Memphis manufacturing plant.

The Cummins ReCon plant on Pershing, just north of Summer Avenue, is closing by the end of September, putting roughly 300 people out of work.

WASHINGTON (Reuters) — Between 150 and 200 National Guard deployed to Washington, D.C., to provide security for President Joe Biden's inauguration have tested positive for the coronavirus, a U.S. official said on Friday.

The U.S. government imposed unprecedented security measures in the city following the deadly Jan. 6 attack on the Capitol by supporters of former President Donald Trump, including fences topped with razor wire and checkpoints manned by National Guard.

PANOLA CO., Miss. -- A Panola County man wanted for numerous four-wheeler thefts amounting to hundreds of thousands of dollars is finally behind bars.

Authorities in Missouri arrested Anthony Sims earlier this week. Sims is expected to be returned to Panola County to face multiple charges.