MEMPHIS, Tenn. — As Harvey continues to diminish in strength, another hurricane gaining strength in the Atlantic Ocean is getting attention.

Irma became a Category Category 3 storm Thursday with winds holding steady at 115 miles per hour. The National Weather Service has the storm moving northwest toward the Caribbean, but said it’s too early to know if it will make landfall or where.

However, that hasn’t stopped one fake weather forecast from being circulated thousands of times across social media, creating unnecessary fear and panic.

“Everyone needs to pay attention to Hurricane Irma,” the post says. “She’s predicted to come through mexico hit us and everything inbetween up to Houston. Shes already a Category 2 and hasnt even got into warm water yet.”

While it may look similar to the real deal, it’s not. Forecasters said it is simply too early to tell with any accuracy where the storm will hit if it does at all. In addition, the National Oceanic and Atmospheric Administration has not released any such projection.

The post itself has received backlash on social media, with many pointing out it’s illegal to use the NOAA’s logo.

According to Cornell Law School, “whoever knowingly issues or publishes any counterfeit weather forecast or warning of weather conditions falsely spreading representing such forecast or warning to have been issued or published by the Weather Bureau, United States Signal Service, or other branch of the Government service, shall be fined under this title or imprisoned not more than ninety days, or both.” 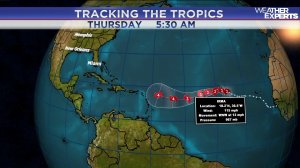 MEMPHIS, Tenn. — A Memphis man is facing a long list of charges after police say he escaped custody twice.

Investigators say Marcus Dotson first escaped custody after officers confronted him Tuesday morning as he was allegedly pushing stolen lawn equipment near Southern and South Greer in the East Buntyn neighborhood. They had to chase him on foot after he took off running.

Owners said the two employees were not showing symptoms.

A hearing was held Tuesday for Robinson's case.

‘I hope one of y’all pick me’: 9-year-old Oklahoma boy wants place to call home

MPD confirms manhunt that led them to North Memphis neighborhood

For Americans waiting on virus aid, no new relief in sight

Meat prices are finally falling — except for hot dogs

‘I hope one of y’all pick me’: 9-year-old Oklahoma boy wants place to call home

MPD confirms manhunt that led them to North Memphis neighborhood