The rally, held in downtown Fort Lauderdale, was attended by scores of students from Marjory Stoneman Douglas High School, where the carnage happened.

Teens spoke passionately during Saturday’s rally in front of the federal courthouse, pleading with lawmakers to change the nation’s gun laws.

One student, Emma Gonzalez, angrily criticized politicians who take campaign contributions from the National Rifle Association. She challenged them to stop taking money, leading the crowd in a call-and-response chant.

She also said adults who knew that the shooter was mentally ill should have done more to prevent him from having a weapon. 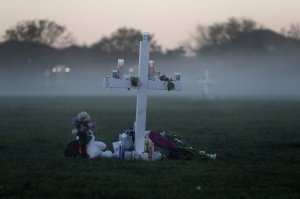 From a mosaic of public records, interviews with friends and family and online interactions, it appears that Cruz was unstable and violent to himself and those around him — and that when notified about his threatening behavior, law enforcement did little to stop it.

He reportedly left a suburban Palm Beach County mobile home in November because his benefactor gave him an ultimatum: you or the gun.

The Palm Beach Post reports Rocxanne Deschamps said, “He bought a gun and wanted to bring it into my house” in public comments that have since been removed from her Facebook page.

Chad Bennett, a friend of Deschamps’, said Nikolas Cruz “chose the gun and he left.”

He then went to live with another family; his mother died in November and his father died years ago.

Florida’s child welfare agency investigated after he cut himself in an online video but found him stable, according to state records.

The Sun-Sentinel reported that Florida’s Department of Children and Families investigated when Cruz posted a video on the social media network Snapchat showing him cutting his arms in 2016. The agency was called to investigate. Cruz, then 18, was listed as an “alleged victim” of medical neglect and inadequate supervision; his adoptive mother, then-68-year-old Lynda Cruz, the “alleged perpetrator.”

“Mr. Cruz was on Snapchat cutting both of his arms,” the Florida DCF abuse hotline was told in August 2016, the paper reported. “Mr. Cruz has fresh cuts on both his arms. Mr. Cruz stated he plans to go out and buy a gun. It is unknown what he is buying the gun for.”

According to the paper, DCF’s investigation was completed that Nov. 12. The agency concluded that Cruz had not been mistreated by his mother, was receiving adequate care from a mental health counselor and was attending school.

Mental health center staff “came out and assessed the (victim and) found him to be stable enough not to be hospitalized,” the DCF report said.

Cruz had been diagnosed with autism, a neurological disorder that often leads to social awkwardness and isolation, and attention deficit-hyperactivity disorder, or ADHD.

Three teens told Buzzfeed on Saturday that Cruz became jealous and angry when his ex-girlfriend broke up with him and began seeing someone else.

The FBI said it received a tip last month that Cruz had a “desire to kill” and access to guns and could be plotting an attack, but agents failed to investigate. The governor called for the FBI director to resign.

A person close to Cruz called the FBI’s tip line on Jan. 5 and provided information about Cruz’s weapons and his erratic behavior, including his disturbing social media posts. The caller was concerned that Cruz could attack a school.

In a statement, the agency acknowledged that the tip should have been shared with the FBI’s Miami office and investigated, but it was not. The startling admission came as the agency was already facing criticism for its treatment of a tip about a YouTube comment posted last year. The comment posted by a “Nikolas Cruz” said, “Im going to be a professional school shooter.”

The FBI investigated the remark but did not determine who made it.

Attorney General Jeff Sessions said the shooting that killed 17 people Wednesday was a “tragic consequence” of the FBI’s missteps and ordered a review of the Justice Department’s processes. He said it’s now clear that the nation’s premier law enforcement agency missed warning signs.

Broward County Sheriff Scott Israel said his office had received more than 20 calls about Cruz in the past few years.

Cruz faces 17 counts of first-degree murder in the shooting at Marjory Stoneman Douglas High, is being held at the Broward County Jail without bond.

OXFORD, Miss. - John Petty Jr. scored 21 points, Jaden Shackelford had 18, and Kira Lewis Jr. added 17 to lead Alabama to a 103-78 victory over Mississippi. Alabama continues to boast one of the best-producing offenses in the country, going 37 of 66 from the field, hitting 13 3-pointers and besting the Rebels 25-15 in assists. Alex Reese chipped in 12 points, and the Tide bench scored 31. Breein…

COLLEGE STATION, Texas - Josh Nebo matched a career high with 21 points, Savion Flagg added 15 points and 10 rebounds and Texas A&M had its best shooting performance of the season in an 87-75 victory over Mississippi State. Wendell Mitchell scored all 20 of his points in the second half for Texas A&M, which collected its second NET top 50 win of the week. Quenton Jackson added 18 points…

FAYETTEVILLE, Ark. - Isaiah Joe returned from a five-game absence to lead Arkansas in scoring with 21 points and a 78-68 victory over Missouri, snapping a five-game losing streak for the Razorbacks. Missouri, which outrebounded Arkansas 36-23, was led by Kobe Brown, Xavier Pinson and Dru Smith, each scoring in double figures for the Tigers, led by Brown’s 17. The trio shot just 3-for-16 on 3-pointers.

Woman accused of driving drunk with infant in the car