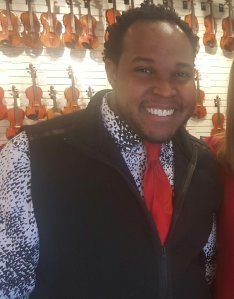 MEMPHIS, Tenn. — It’s the murder that broke a sad record for the city of Memphis: 214 homicides so far this year – the most in a single year in more than two decades.

Waters’ passion for music was only surpassed by his dedication to his students.

“Probably one of the most passionate music educators we’ve seen walk through the doors,” CJ Averwater, with Amro Music, said. “That was his goal – he focused on the kids and made sure they had the right stuff to make music.”

Waters, a music teacher at Belle Forest Elementary School and part-time employee at Amro Music, was found shot to death in his home Friday after he didn’t show up for work.

She says Brooks and Wilson broke into her son’s house, allegedly killing him over his wallet and a few electronics.

“I’m mad, I’m angry, I’m bitter, I’m hurt, my heart aches,” she said. “I’m going to miss him so much. I don’t know what I’m going to do. I am so tired of those type of people ruining other peoples’ lives because they don’t care about their own.”

And even though nothing can bring him back, for Waters’ family, seeing justice served would be a good start down the road to healing.

“I hope that they have a lot of time to think about that, sit in jail and think about what they’ve done,” Lisa Waters said.

And maybe some prayers, that time will help with that.

A GoFundMe page has been set up in honor of Waters by his former colleagues at Amro.

All of the money raised will be used to support his passion for music education in the city of Memphis with guidance from the Waters family and Shelby County Schools.

You can donate through the link on Nina Harrelson’s Facebook page.

MEMPHIS, Tenn. -- Friends say a Memphis rapper was one of two people killed in a shooting outside the Valero gas station at Knight Arnold and South Mendenhall Wednesday night.

In a unanimous vote Thursday night, the council approved the purchase of 25 cameras for $91,000. Captain Joel Johnson says that's enough cameras to cover each on-duty shift.

(NEXSTAR) – The Federal Emergency Management Agency was inundated with calls after opening the hotline to its COVID-19-related funeral assistance program.

FEMA said in a news release that the more than 1 million calls were too much for the agency's call centers and caused technical issues Monday. The flood of calls came in within the first 90 minutes that the hotline was open, CNN reports.

MPD: One found shot to death in Frayser