NEW YORK — Emergency crews were responding to an explosion in Manhattan Saturday night.

The nature of the incident is unclear, but sources tell CBS News the explosion occurred in a dumpster.

CNN reports sources saying the cause was an explosive device. 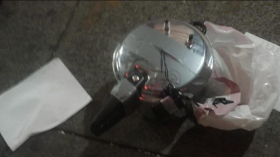 A second device was found on 27th Street.

Police say a pressure cooker with wires attached was found.

Natural gas has been ruled out.

At least 29 people were hurt, the fire department said, though none of the injuries appeared to be life-threatening.

“This is a very dense area, the whole block is restaurants and residences and this area on a warm Saturday night is an area swarming with people,” New York City Councilman Cory Johnson told 1010 WINS.

Johnson, who represents the area, told cable news station New York 1 that FBI and federal Homeland Security officials were on the scene, in addition to New York City police.

The reports of a possible blast comes hours after a pipe bomb exploded in Seaside Park, New Jersey, shortly before thousands of runners participated in a charity 5K race to benefit Marines and sailors.

Numerous people were sharing images and video of the massive response on social media.

Moments after the blast on #23rd street #nyc #blast pic.twitter.com/lwbQvR5bDE

#Explosion outside our apartment at 23rd and 6th in #newyork. Terrified. Hoping everyone is okay. pic.twitter.com/i3q4cG7aWT

Apartment is being blocked off – #Explosion #Chelsea #NewYork pic.twitter.com/B14pWOFpZ0

This is a developing story.

IRS tips to get your tax refund fastest

Man tells MPD ‘When I get out, I’m going to get even’

‘People will be murdered,’ boy wrote before shooting

New congressional districts in TN could lead to lawsuit, …

Man tells MPD ‘When I get out, I’m going to get even’

IRS tips to get your tax refund fastest