DESOTO COUNTY, Miss. — A DeSoto County family is hoping someone sees something or knows something in the disappearance of 16-year-old Maddie Work.

She’s been gone from her Olive Branch area home since Saturday, and her mother believes social media played a role in her leaving. Now, Maddie’s mother, Sarah Work, has a simple message to the teen, “Everyone loves you. And for whatever reason you ran, for whatever you’re looking for, wherever you are, it’s okay. Just come back home.”

Work says Maddie slipped out of a window around 1:30 Saturday morning. She says there had been problems with her social media usage. Maddie wasn’t allowed to have Instagram and Snapchat, but Work say she recently discovered Maddie had a hidden phone with the apps. She thinks her social media usage contributed to her leaving.

Captain Len Edwards, executive director of The Commission on Missing and Exploited Children, echoed her advice to be vigilant. “Moms and dads may think they have their child’s password. Well, they may have one password to one account, but the child may have five, six, seven, eight different accounts. As far as the phones go, they take the chip card out and put in another phone,” he said.

Social media may have its downfalls, but in this case it could also help.

Maddie’s picture has been shared by thousands of people across the web.

“One in seven children are recovered because someone recognizes the child, so those are pretty good odds,” Captain Edwards said.

The DeSoto County Sheriff’s Office is officially calling Maddie a runaway, but said they’re checking all leads. The FBI is also helping as well, and says they will assist in whatever detectives need.

Please contact Det. C. Logan if you have any information. (662) 469-8519 or clogan@desotocountyms.gov you can also contact Crimestoppers at (662) 429-TIPS and can remain anonymous. 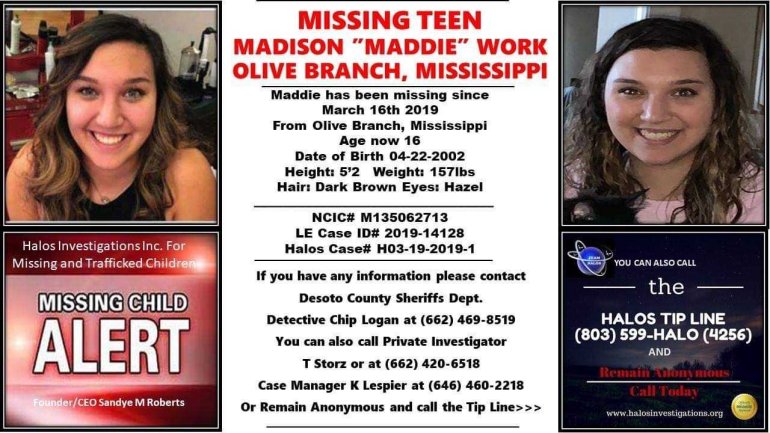