Shelby County Sheriff’s deputies discovered all 11 of them yesterday afternoon while executing a search warrant and looking through the house for drugs. MAS hasn’t released specifics about how the dogs were living but said conditions were so bad they had to be seized.

Jerry Malone lives in the neighborhood, and he said he’s disgusted by the allegations.

“You mistreat a dog, that’s really low down because they can’t do anything about it. They got to depend on you,” Malone said. 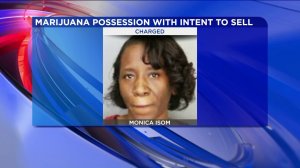 Deputies arrested the dogs’ owner, Monica Isom, after finding drugs and machinery used to sell drugs in various spots throughout the house, including inside the washing machine. The 44-year-old faces a number of drug-related charges and could face animal cruelty charges, too.

“You feel sorry for the dogs,” Malone said.

WREG went to Isom’s house hoping a friend or relative would be there to answer questions about the drugs and dogs, but a man who came out minutes after we knocked on the door refused to talk with us and threatened violence if we turned our camera back on.

The dogs now join a growing list of animals at the shelter that need to be adopted, and time is of the essence because the shelter is running out of room. MAS says they took in 71 animals Tuesday alone.

The dogs seized at the aforementioned house are listed below. They are a mix of breeds and are larger dogs. They will be cleared for adoption Sunday.

The shelter is located at 2350 Appling City Cove and is open daily from noon to 4 p.m. and until 7 p.m. on Tuesdays and Thursdays.

(CNN) -- The Florida Department of Health has reported at least 15,299 new COVID-19 cases, the highest number of new cases in a single day by any state since the coronavirus pandemic began.

The record-setting number from Saturday was reported by the state Sunday morning.

MEMPHIS, Tenn. — One person is dead after being shot in the university area Sunday evening.

Memphis Police said officers were on the scene of the shooting around 8:45 p.m. in the 3500 block of Watauga Avenue.

MCALLEN, Texas (KVEO) - The Valley is mourning the loss of the two McAllen police officers that lost their lives while serving in the line of duty.

"To hear that this happened, especially to such a great individual. I know he loved to serve. That was what he did. I guess the role of a police officer is to serve," said Oscar Riojas, the athletic director at the Weslaco Independent School District.

Trump and Fauci not speaking as coronavirus pandemic worsens

Charlie Daniels Jr. speaks out on Facebook about death of dad

One dead, one injured after overnight crash in Nutbush

Two dead, ‘several’ others injured after shooting at Mississippi concert of Memphis-based artist

Man shot to death in Whitehaven

One killed in stabbing in Med District

Trump and Fauci not speaking as coronavirus pandemic worsens