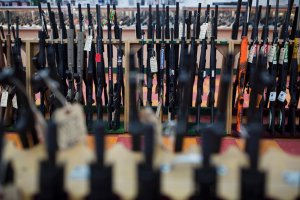 NEW YORK — Dick’s Sporting Goods Inc., one of the largest sports and outdoors retailers in the nation, says it will no longer sell assault-style rifles and are modifying the age at which they will sell a person a gun.

The announcement was made Wednesday morning on ABC’s Good Morning America.

According to ABC, assault-style rifles, or modern sporting rifles, along with high-capacity magazines will no longer be sold in any of the company’s 700-plus stores.

The guns were initially removed from Dick’s Sporting Goods stores after the Sandy Hook school shooting, but several months later the guns were made available through their Field & Stream stores.

CEO Ed Stack said this time the move is permanent. From here on out anyone wishing to purchase a firearm at Dick’s Sporting Goods will also have to be 21.

In a statement obtained by the news outlet, the company said, “”We support and respect the Second Amendment, and we recognize and appreciate that the vast majority of gun owners in this country are responsible, law-abiding citizens. But we have to help solve the problem that’s in front of us. Gun violence is an epidemic that’s taking the lives of too many people, including the brightest hope for the future of America — our kids.” 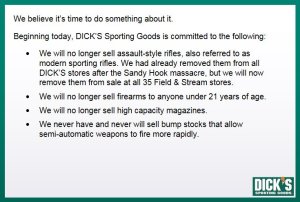 The announcement comes just weeks after 17 people, including students, were gunned down inside Marjory Stoneman Douglas High School in Parkland, Florida.  In November 2017, the shooter, Nikolas Cruz, reportedly purchased a gun from Dick’s after threatening another person. While it wasn’t the gun used in the massacre, the sporting company said the incident left them reeling.

On Wednesday, Stack said witnessing the grief afterwards and the bravery of the students coming forward demanding change has convinced them they need to take some sort of action.

The company will continue to sell other firearms.

HELENA-WEST HELENA, Ark. -- Helena-West Helena Police say a man has been arrested in connection with a shooting in West Helena.

Police reportedly responded to the area of North 6th Street and Garland at around 6:36 a.m. Tuesday. Officers found a man suffering from gunshot wounds to his back, stomach and leg.

HELENA-WEST HELENA, Ark. – A man has been arrested following a February robbery and shooting in West Helena.

Helena-West Helena Police responded to the area of North 7th Street and Baldwin Avenue at around 11:20 p.m. Saturday, February 27.

OXFORD, Miss. – Oxford’s animal shelter won’t be taking any new animals after the results of a police investigation were released Tuesday.

The City of Oxford made the announcement Thursday but said the shelter, which is run by the non-profit Mississippi Critterz under a contract with the city, will continue to care for the animals already there.