DESOTO COUNTY, Miss. — Since Saturday morning, Sarah Work has been living in a nightmare. Her 16-year-old daughter, Maddie Work, slipped out of a bathroom window at their home around 1:30 a.m.

Now, the FBI is assisting the DeSoto County Sheriff’s Office in the search.

“I’m so angry. I’m not angry at her. I’m just so angry. I’m angry I didn’t see. I’m angry that I didn’t know people that knew things,” Work said. Some of those things may have led to her daughter’s disappearance.

Work was at her shift as an ER nurse when Maddie left their home in the Belmor Lakes neighborhood outside of Olive Branch. Who she left with is a mystery. Work says she had just talked to her daughter hours earlier. “She was playing video games with her middle brother and just laughing when I talked to her. She was just, ‘Hey mom. Alright, love you, bye.’ You know, just bubbly.” 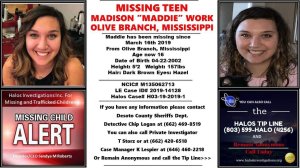 Work says that’s how she knows her daughter to be. However, the mother says there had been problems with social media usage. She says Maddie started off in a troubled home and has lived with her since she was 4 years old. Maddie was officially adopted when she was 8 years old.

The family restricted social media, but Work recently discovered her daughter had hidden accounts. “There was a Maddie that she didn’t want me to know, because of the fact I would say, ‘Well, how do you know this person?’ And for her to tell me how she knew them, she would have to say, ‘I met them on Instagram. I met them on Snapchat,” she said.

Maddie’s phone had been taken away, but her mother believes she was able to secretly gain access to another one, and is convinced social media played a role in her disappearance.

Her message to parents is to, “Definitely go into their phones. They don’t have privacy. These are children. It is our job to keep them safe, and if it makes you a mean parent, be a mean parent.”

She doesn’t know if her daughter met someone online or if she could be connecting with biological family members. But her message to her daughter is clear, “Everyone loves you. For whatever reason you ran, for whatever you’re looking for, wherever you are, it’s okay. Just come back home.”

NORTH FORT MEYERS, Fla. (WKRG) -- Police in Southwest Florida are searching for a group of sport bikers accused of turning their rage on a driver who didn't like their stunts.

Police say the bikers were weaving in and out of traffic in North Fort Meyers on their performance bikes when a driver yelled at them.

ROME (AP) — Pope Francis is honoring civil rights leader Dr. Martin Luther King Jr. on the commemoration of his birthday, saying his message of equality through peaceful means remains more timely than ever.

Francis sent a message of prayer Monday to King’s daughter, the Rev. Bernice King, with whom the pontiff met in 2018. He called for unity, not division and extinguishing hatred and “not holding onto it.” The Vatican has long spoken out about racial injustice, and popes dating to Paul VI have voiced support for King’s message of nonviolent protest and the civil rights movement.

Why is Twitter allowed to restrict what politicians and other users say online?

When can grandparents safely visit their grandkids after receiving the COVID-19 vaccine?

U.S. Capitol temporarily placed on lockdown due to fire several blocks away

Why is Twitter allowed to restrict what politicians and other users say online?

When can grandparents safely visit their grandkids after receiving the COVID-19 vaccine?