Investigators didn’t reveal what prompted them to return to that area to search, but said the efforts began around 7 a.m. Tuesday morning. More than 60 deputies were sent out to look for clues and are scheduled to cover several miles of terrain.

A command post was established at Dexter and Lenow. There are neighborhoods nearby, but also some wooded and grassy areas.

Capt. Anthony Buckner with the Shelby County Sheriff’s Office said law enforcement had not received any specific tip about that area. Instead, he said, it was just a logical place to continue searching.

They concluded their search for the day at 1 p.m., saying they did not find any new clues.

SCSO began the search around 7:00am. Members of the sheriff’s office will search several miles of terrain over a span of several hours. Lenow Road is closed between Macon and Dexter. Please select an alternate route to avoid delays. pic.twitter.com/HbzXMcyNRA

Detectives with Shelby County Sheriff’s Office have been working to figure out what happened to Hayes since she was reported missing August 9.

But as it turns out, her family actually hadn’t heard from her since the end of May.

Family members originally thought she was OK and said her husband told them she’d been at their home. 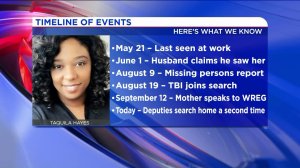 It was when Hayes missed her son’s birthday and first day of school that alarm bells went off. Her husband claimed she left, but he didn’t say where, leaving her car at their Cordova home. Hayes’ family isn’t buying that claim.

“I don’t want her to be forgotten, you know, she was a living, breathing human being,” Roberta Nutall said. “Beautiful person, inside and out. She loved people, of course. She’s a nurse. She loved helping people.”

The Shelby County Sheriff’s Office is still treating the case as a missing person’s case.

Buckner said the sheriff’s office had been in contact with Hayes’ husband, but he had no further information.

Anyone with any information should contact the Shelby County Sheriff’s Detective Office at (901) 222-5600.

This is a developing story.