WREG received a tip this summer that a Florida inmate serving a life sentence had confessed to killing two women in Memphis in the 1990s. When investigative reporter Jessica Gertler met with him, she found out he could be connected to even more unsolved murders around the Mid-South.

MEMPHIS, Tenn. — One confession turned into many more when our investigator Jessica Gertler sat down with a confessed serial killer inside the Florida prison where he’s currently spending a life sentence.

Michael Shane Townson admitted to us — not police — that he attacked a woman with a stick at a cemetery in Rosedale, Mississippi.

He says that attack has haunted him for years, and he asked us to find out if the woman died.

Rosedale is a  rural farming community in the Delta, where some say blues singer Robert Johnson sold his soul to the devil.

Townson said he was on cocaine and other drugs when he passed through Rosedale, around the time he had killed two women in Memphis in the winter of 1993.

On June 7, he wrote, “been thinking a lot about an incident that happened in Mississippi, I think rose something or other. I picked up this woman, just to get high with … “

Townson says he doesn’t remember much about her, except she was a pretty, young African American woman. He thinks he met her at a gas station near the town’s square, and they drove to a cemetery to do drugs.

The rest of the online conversation was exactly what he told us in person.

“We were out on the car. She pulled a gun on me. Tried to take my money and my dope,” he said.

Townson said he then punched her and grabbed her gun, but it wasn’t loaded.

“I hit that girl with a stick,” he said. “When I hit that girl a second time, I was just — what the hell? There’s a truck coming. A pickup truck right there watching me. I was like — she was still alive. She was moving and moaning. She was alive.”

Townson said he was nervous he was about to get caught.

“I seen this tuck. Like the outline of  pickup truck. It was on the other side of these trees, because there was a cemetery and s**t out there. I was like oh s**t, I wonder if he sees me.”

No one got out of the truck. He dropped the stick and slowly backed away.

He said he doesn’t know what happened to the woman. To this day, he wonders if she died.

When we got back from interviewing Townson in Florida, my photojournalist and I went to the Bolivar County Sheriff’s Office, since they would have investigated any big crime in Rosedale at the time.

Two investigators met with us off-camera for about 20 minutes. We told them everything Townson admitted.

They said there was a murder in Rosedale around the same time that remains unsolved, but they wouldn’t give us any details other than the victim’s name: Patrice Horsley.

People in Rosedale say her murder is still talked about nearly 25 years later.

“I just heard she was found in the cemetery, dead,” said Enray Turner, a lifelong Rosedale resident.

“Devastation and rumors,” Turner said. “When stuff happens, especially when you have no witness and nothing like that, it has you wondering will it happen to me? Will it happen to my daughter?”

When we got back to Memphis we continued to research the case and were finally able to find someone close to this case. The victim’s brother has since moved out of the town, but spoke with us on the phone.

He shared a photo of his sister and told us her murder continues to weigh heavily on the family. She was a beautiful life lost too soon and every day, they hope for answers and justice.

Horsley’s brother also agreed to send us the police and autopsy reports to see if they match Townson’s confession.

Horsley’s brother says she disappeared in December of 1993 — the same time Townson was allegedly in the area.

Deputies found her body on Jan. 14, 1994 in a cemetery next to the Mississippi River levee.

The offense report states that it looked liked at one point, Horsley tried to run, but “someone went around the tree and picked up a limb or big stick and beat her in the head with it.”

“She tried to rob me,” Townson said. “That’s why I hit the b**ch with a stick. Excuse my language. I didn’t have nothing. I had to pick up something.”

The state’s medical examiner’s office performed the autopsy report indicating Horsley was strangled and had multiple injuries to her head. The examiner indicated it was a “violent death.” 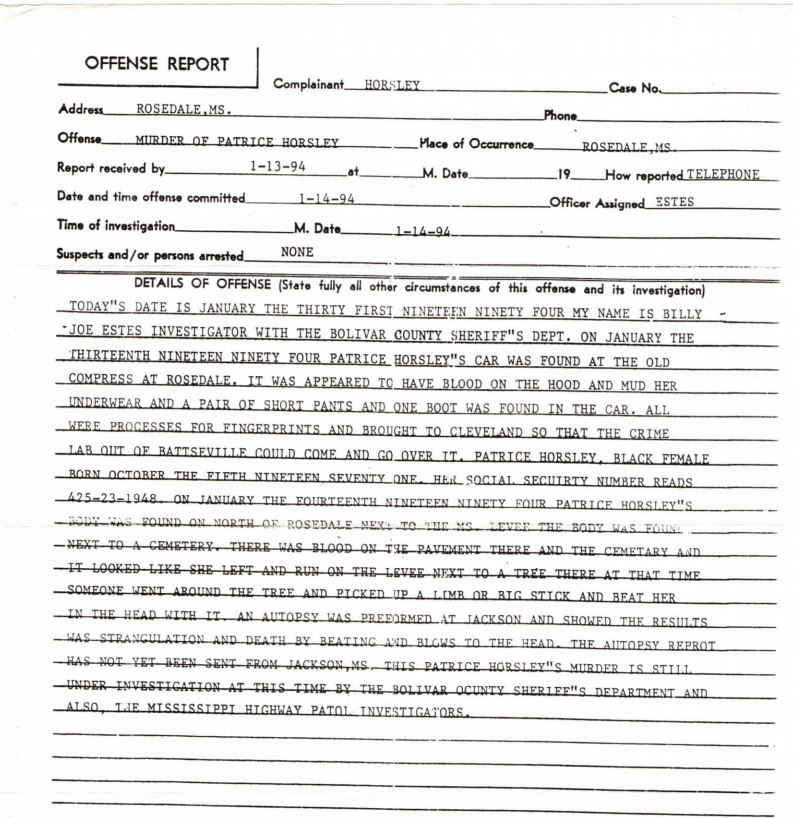 We’ve reached out to Bolivar County deputies multiple times to see if they have talked to Townson, or plan to, but have never heard back.

Townson sent us a message a few days ago saying he heard some detectives from Mississippi wanted to talk to him, and he was hesitant on whether he wanted to be transparent  or not.

He’s said before that he’s afraid of getting the death penalty.

Victims identified in I-40 crash that left two dead

Veteran with cancer touched by friend’s act of kindness

Teacher without transportation gets much-needed help

Woman receives support from her church after surgeries

Woman known for helping others gets her own blessing

Man, teen on probation after attack at MS catfish …

One dead after crash at Winchester and Airways

How Black women served a critical role in securing …

Why the US was able to bring home Brittney Griner …

Victims identified in I-40 crash that left two dead