WREG received a tip this summer that a Florida inmate serving a life sentence had confessed to killing two women in Memphis in the 1990s. When investigative reporter Jessica Gertler met with him, she found out he could be connected to even more unsolved murders around the Mid-South. This story airs Tuesday at 5 p.m. on WREG News Channel 3.

MEMPHIS, Tenn. — A convicted killer in Florida confessed to the murder of a Memphis mother found strangled, beaten and left on the side of the road more than two decades ago, along with a second unidentified woman.

Michael Shane Townson is now admitting to killing multiple women in the Mid-South. He agreed to an interview with our investigator Jessica Gertler inside the prison he’s currently serving a life sentence in.

Nine days before Christmas in 1993, Allean Michelle Branch got off work in downtown Memphis. She was near the Peabody when she met Townson.

She had no idea just how dangerous Townson was.

Townson told WREG he was staying in a cash motel in Memphis at the time. He said his memory is a little foggy. He admitted he was on a lot of drugs.

However, he says he remembers Branch agreed to help him find some drugs.

“We rode around. Ended up getting high and stuff,” he said.

They later drove to a wooded area.

“My intentions were not to hurt anyone. That’s not my intentions,” Townson said. “Didn’t want to kill anyone.”

But he says he couldn’t control himself.

“We were just fooling around. Next thing you know, I just snapped. I remember a little more. It’s not like the first time, when I completely blacked out.”

Townson doesn’t know what triggered him. He just knows what he did. He said he may have hit her once or twice, then grabbed her around the neck.

He said he took her out of the car, and put her on the side of the road with her shoes by her. Then tossed her bag out of the car. 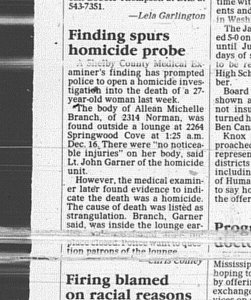 The crime scene was not in old Commercial Appeal articles buried in library archives. They just briefly mention Branch was found dead on Springwood. She was 27 years old.

Lashelle Vester was Branch’s youngest child. She was eight years old at the time.

“I remember my grandma getting a call, and my granddad going to see what was going on. Then them coming back to tell us what happened,” Vester said. “I can remember crying and my grandmama was like, ‘It’s going to be okay.'”

Vester went decades without answers, until Townson sat down with authorities at his Florida prison and finally confessed to Branch’s murder and many more across the Southeast.

“They reached out to us to let us know this information to see if we wanted to interview him,” said Lt. Tony Mullins with Memphis Police Department. “Of course, we did.”

“He gave a lot of details that only the killer would know,” Mullins said, including the crime scene Townson described.

MPD immediately notified Vester, who said she’s thankful for answers but having trouble grasping it all.

“You took someone’s life, but why?” she said. “You didn’t have a reason to. She was sweet. She was caring.”

Townson said he was in Memphis for a short time. He says he visited Sun Studio and he frequented bars on Beale Street. In fact, he says he found his second victim a few blocks from Beale.

He said he and the woman drove about 10 minutes out of downtown to do drugs. He remembers it being a wooded area with trash around.

And like last time, they started fooling around when something triggered him.

Paul Hagerman with the district attorney’s office said the second victim hasn’t been identified. He’s working with the detectives who interviewed Townson.

“He gave a physical description. A female black, who he said had green eyes,” Hagerman said. “He suspected they could have been contacts. He said she had a large beeper like they had back in the ’80-’90s with a telephone.”

Townson gave us that distinct description too, followed by a plea. 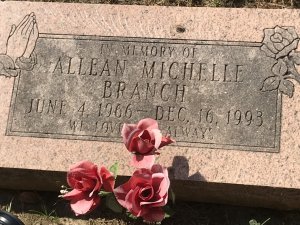 Police told WREG they brought back a written confession from Townson in Branch’s killing, but said he won’t be extradited to Memphis to stand trial. The district attorney’s office has yet to confirm whether charges will be filed.