WREG received a tip this summer that a Florida inmate serving a life sentence had confessed to killing two women in Memphis in the 1990s. When investigative reporter Jessica Gertler met with him, she found out he could be connected to even more unsolved murders around the Mid-South — crimes police are just learning about.
The first story airs Monday at 10.

MEMPHIS, Tenn. — A confessed serial killer in Florida now admits he committed crimes in the Mid-South.

Michael Shane Townson is  currently carrying out a life sentence at the Sumter Correctional Institution, about an hour from Orlando, Florida.

In an interview you’ll only see on WREG, he came clean to our investigator Jessica Gertler and photojournalist Matt Brewer. For more than an hour, they sat down with him in a small room with only a wooden desk separating them. Correctional officers waited outside.

“Man, I have so much stuff written down for you, Ms. Gertler. So much stuff,” Townson said.

The skittish, high-energy man covered in tattoos took off the glasses he broke in a fight that morning.

“I really have nothing to lose. What are they going to do? Give me another life sentence and it runs concurrent?” he said.

‘I was on coke real bad’

Townson said he was born in Orlando in 1969. He grew up with his mother and stepdad in a small home not far from downtown.

“They were just drug dealers,” he said. “They had big parties. I was always the pass-around guy.”

Townson says at a young age, he was physically and sexually abused by his stepfather and family friends.

“Just got hell there,” he said. “I was abused bad. Burned. You know, burned with a cigarette when I didn’t do what they want. That kind of s**t. I had a rough life.”

A rough life, he tried to run away from at one point. He begged to live with his father, a traveling musician, but says his mother forced him back to Orlando.

Townson said right before his 17th birthday, he tried cocaine for the first time and quickly became hooked.

“I was on coke bad. I was on coke real bad. You know, it still doesn’t work,” he said as he tried to sniff air up his nose.

Desperate to feed his addiction, he says he began breaking into safes at gas stations, convenience stores and fast food restaurants.

It fed a lifestyle that eventually spiraled. Around 1988, he says, he and a woman met up to do drugs near a park in Orlando, Florida.

“Started getting high, started fooling around, and I don’t know if it was something she said or where she touched me, but I just snapped,” he said.

Townson can’t say what happened next. He only  remembers waking up and seeing the woman beaten to death.

He said he doesn’t remember the woman’s name. He was high when he met her.

He just knows he booked it out of Orlando and on to a new city. 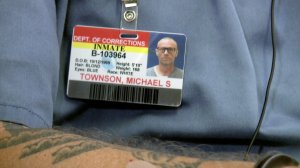 Townson says he spent the next few years on many drugs as he traveled all over the Southeast.

He says he made it to the Mid-South, broke into a couple of safes in Memphis, and even looked at trying to break into the Peabody.

All the while, he says he continued to do an absurd amount of drugs with women he’d meet in the cities he wind up in.

But then it would turn into the deadly rage he mentioned earlier. Something would trigger him. He just didn’t know what.

“No kissing,” he said. “You have to be something for me to make out with you. I don’t care. It’s just me. Not a kisser. It either had to be something she said as we were fooling or somewhere she touched me.”

Or he says it could also be a word he despises.

“I hate the word daddy. You know what? Don’t call me daddy,” he said while laughing. “That’s kind of perverted, ain’t it?”

But despite not knowing what triggered him, he says continued his drug-obsessed life-style that often ended with another woman dead.

“I didn’t do it because they were bad people to me,” he said.

How many did he kill?

That’s nine murders Townson is now admitting to, including the one that landed him in prison in 2007. That one involved a childhood friend he beat to death in her home in Titusville, Florida, leaving her buried under her children’s clothes and blankets.

Most of his victims, though, were strangers, he said.

He mapped out where his murders happened — Kentucky, Florida, South Carolina, and two women in Memphis.

Tuesday at 5 p.m. on WREG, Townson tell us what he remembers about those Memphis murders. One woman has been identified, and you’ll hear from her family.  The other woman hasn’t been identified. We’ll reveal specific details that could help loved ones get some closure, and hear this confessed serial killer’s response when we ask him if he’s sorry. That’s coming up tomorrow at 5 pm.