WREG received a tip this summer that a Florida inmate serving a life sentence had confessed to killing two women in Memphis in the 1990s. When investigative reporter Jessica Gertler met with him, she found out he could be connected to even more unsolved murders around the Mid-South.

MEMPHIS, Tenn. — If the bright sun didn’t do it, the tall, overgrown trees made it hard for deputies to see the home they were called to.

They were greeted by a frazzled man. He was screaming, “You have to see this! Something isn’t right!”

Deputies noted they arrived to a home at 3324 Virginia Drive in Titusville, about an hour east of Orlando, the morning of January 17, 2007.

They described the man, William Stauffer, who ran up to their patrol car as “visibly upset.” They asked him to calm down and followed him into the home. They entered through the carport and into the side door left wide open.

Inside the small, three-bedroom home, deputies noticed a cell phone lying on the floor next to the couch. There was “a reddish substance on it, which was consistent with blood.”

In the corner, they noticed a pile of clothing with a blood-stained Barney bed sheet and a small pillow lying on top.

A few feet away, a hammer and an unknown tool also covered in blood.

Deputies asked Stauffer to go back outside, and they called for backup.

He talked to us inside the Sumter Correctional Institution, about two hours from Titusville. It’s where he’s serving a life sentence.

Townson said he was also living in the home at the time. The homeowner, Sherri Carman, let him move in the week before deputies were called to the house.

Townsonhad nowhere to go since he just got out of prison for drug, burglary and robbery charges.

“She was family. The girl was my damn family. I watched her grow up. Called her big foot. She had big feet. I knew her momma, her brother, cousins, everybody,” he said.

Stauffer, who first alerted deputies, said he had no idea where they were. He just said he lived in the home as well, and he dated Carman at the time.

Stauffer explained he last spoke to Carman around noon the day before. She apologized for not running any errands, because she overslept.

About three hours later, Stauffer got a call from her three young kids. They said they were upset their mom wasn’t there when they got home from school. Stauffer instructed them to go to their neighbor’s house until their grandfather picked them up.

Stauffer said he didn’t get home until the following morning when he got off of work. 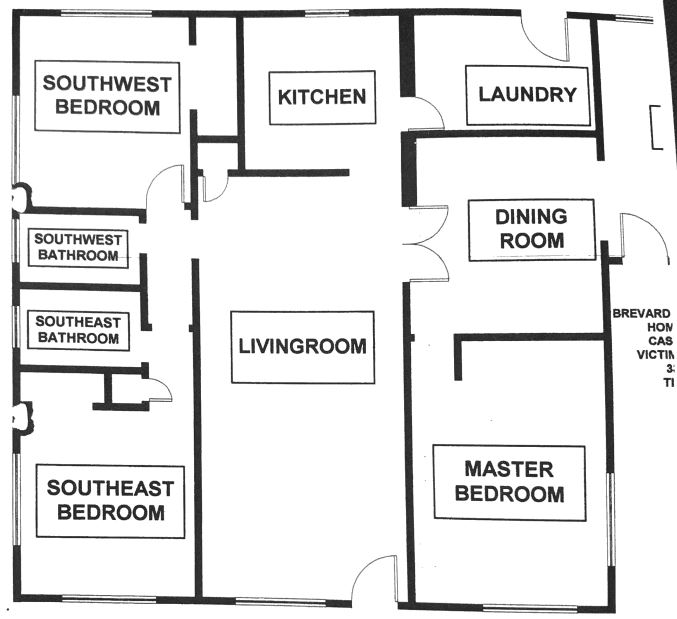 Above: Layout of the home

Court records documented what the rest of the house looked like.

Deputies canvassed every room and slowly made their way to the laundry room. The door was locked. Stauffer kicked down the door.

Deputies noted large piles of clothing. At first glance, they missed the body buried underneath.

Neighbors didn’t see anything suspicious. One recalled seeing Carman’s car in the driveway the morning before deputies arrived.

Just before 8 p.m. on Jan. 17, 2007, a lieutenant finally located “a deceased white female under a pile of clothing in the laundry room of the residence.” He went on to state, “due to the body’s condition and position, it was not possible to make a positive identification with facial features.”

All he could recognize was a small cross tattoo on the woman’s ankle.

That’s how family later identified Carman. She was only 29 years old.

The next night, the Brevard County Deputies got a call that Carman’s car was found about an hour away.

The couple inside the car told Orlando Police Townson gave it to them in exchange for crack cocaine.

Shortly after, police tracked down Townson, and he agreed to talk to them in exchange for a McDonald’s meal.

Back at the police station, Townson initially told detectives Carman may have given him HIV, which is why “he lost his mind and snapped.”

In further conversations with detectives, Townson confessed to hitting Carman in the head with a fence post pipe.

Townson also confessed to wrapping her head up with a blanket and then blacking out. He said he came to while driving towards Orlando in Carman’s car. He noticed “blood all over his face,” so he used a “bottle of water and poured it over his body to wash the blood off.”

On January 20, 2007, Townson was arrested for first-degree murder.

In fact, he told us he killed Carman, because he suspected she was mistreating her children.

“[Carman] was selling her f**king children. You know what I mean? Literally selling her children. Pictures of her children. I don’t know if she did anything physical with her children,” he said. “Money. Xanax, roxies, Lortabs. The big, the 2006-2007 era, the downer pills.”

There was no mention of that in the hundreds of pages we read through in the police case file. Deputies never listed that as a possible motive and no witness or loved one talked about that in their statements.

We asked Townson if he was remorseful.

On March 13, 2018, he was sentenced to life without the possibility of parole.

“I just want some peace, man. Maybe I don’t deserve it,” said Townson. “I know their people do. I mean, am I sorry? Yes.”