MEMPHIS, Tenn. — Jamilyka Jamison has fond memories of her dad.

“He used to always call and get on my nerves about the bologna and crackers. I’d have to take that up there to him. I just miss his smile and everything,” she said of her father Roy Jamison.

But those memories are tainted now. She said he had a stroke in 2016 and went in to care at Ashton Place nursing home on Walnut Grove.

Before long, she didn’t recognize her dad. 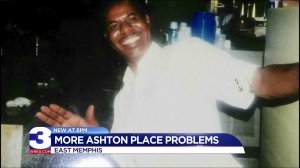 "My daddy was always up and alert. He was real sleepy now. I knew something wrong," she said.

But she said she didn’t know exactly what was going on until it was too late.

About a month into his stay, she got a call; he had a heart attack and was at the hospital. He didn’t make it.

Doctors ruled his cause of death as a combination of anoxic brain damage, cardiac arrest and hypoglycemia.

She blamed facility staff for never feeding him.

“The very next day after I let them know something was wrong, he passed away. I asked for answers. They didn’t give me any answers of what happened," she said.

She’s now suing Ashton Place. And she also saw WREG's coverage of another Ashton Place resident who died after doctors found maggots in his amputation wounds.

“It brought back memories of the way they treated my father,” she said.

“We have heard the same problems for the last 15 years coming out of this facility," attorney Parke Morris said. "This is one of the worst nursing homes not just in Memphis but the entire Mid-South area. It's understaffed, the staff don’t have enough supplies and they're incapable of responding in timely manner.”

And while Jamison knows her dad is gone forever, she said she just wants answers for him and so many others.

“Not enough money in the world will bring my father back but something has to happen," she said.

A representative for Skyline Healthcare would not comment on the case since it occurred before Skyline bought Ashton Place in September 2017.

Health Services Management Group of Cleveland, Tennessee previously owned the nursing home. WREG left a message for administrator Thomas Johnson and has not heard back.

For millions of Americans, a job doesn't only mean a paycheck -- it also provides their health insurance.

As unemployment surges amid the coronavirus pandemic, many laid-off workers will have to find new coverage -- a critical protection as more than 180,000 Americans test positive and many are hospitalized.

NEW YORK — Kroger announced it will provide all of its grocery, supply chain, manufacturing, pharmacy and call center associates a Hero Bonus as they continue to work during the outbreak.

According to the company, $2 will be added to the standard pay rate for all hours worked from March 29 to April.

The US Army has begun calling up members of the Individual Ready Reserve on a voluntary basis in order to help combat the spread of the novel coronavirus, another sign that the US military is seeking to bolster its medical capability as the pandemic continues to spread.

"On March 29, Human Resources Command sent messages regarding the voluntary recall to nearly 10,000 members of the (Individual Ready Reserve) with specific medical skills," Lt. Col. Emmanuel Ortiz told CNN in a statement. Military.com was first to report on the voluntary call up.

Elliot Stabler is back in a ‘Law & Order: SVU’ spin-off

Coronavirus case count: At least 2,239 cases confirmed in Tennessee; 1,073 in Mississippi; 566 in Arkansas

Carnival says it still has 6,000 passengers on ships, some will not disembark until late April