COLLIERVILLE, Tenn. —  Collierville police are searching for a man wanted in a vicious attack over the weekend.

The victim said he was at the Shell gas station in the 100 block of East Highway 72 on Saturday when an unknown man approached him asking for money.  The man told him no and that’s when the suspect attacked, police said.

He pulled out a baseball bat and attacked the man. The victim is expected to be okay.

Collierville police have not been able to identify the attacker, but they are hoping someone will recognize him from the surveillance photos. If you know him, call police at (901) 457-2520. 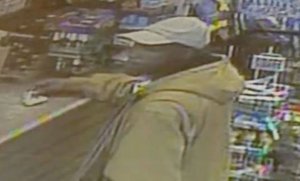 This is the third baseball bat attack WREG has reported on in the past month.

Neil Wadlington told Stacy Jacobson he was riding his bike on Madison Avenue in Midtown when someone got out of a car and attacked him.

“I was just riding along. And the next thing I know, there are bystanders over me waking me up off the sidewalk in a pool of blood,” he said. “One bystander said, ‘A guy got out of the car and hit you with a bat.'”

The attack left him with serious injuries to his entire face, including a broken nose, cheekbone and tooth.

Phillip Jones said he was walking home from a friend’s house on Cowden when his attack happened.

In both cases, the attackers did not steal anything.

It’s unclear if any of the crimes are connected. If you know anything, call Crime Stoppers at (901) 528-CASH.

MEMPHIS, Tenn. — De’Aaron Fox didn’t decide until shortly before game time that he would play against the Memphis Grizzlies. His appearance moved the Sacramento Kings closer to the playoffs. Fox, who sat out Thursday’s loss at Oklahoma City with lower right abdominal tightness, scored 25 points, including 16 after halftime, and the Kings beat Memphis 104-101 on Friday night. Harry Giles III added 16 for the Kings, who moved…

NORTH CHARLESTON, S.C. (AP) — President Donald Trump lashed out Friday at Democrats who have questioned his handling of the coronavirus threat, calling it their new “hoax.”

At a campaign rally in South Carolina, Trump sought to steal some of the spotlight from his Democratic rivals a day before voters cast their ballots in the state's presidential primary.

(CNN) -- Corona beer isn't making any changes to its advertising despite the name's unfortunate similarity to the deadly coronavirus.

Constellation Brands, which brews several variations of the popular lager, said in a statement that its customers "understand there is no link between the virus and our business."

Tourism driving Memphis hotel boom in downtown and beyond

Tourism driving Memphis hotel boom in downtown and beyond