MEMPHIS, Tenn. --  A Clarksdale, Mississippi police officer is in critical condition after being shot in the head Saturday while on duty.

The shooting suspect is in custody.

Investigators said the suspect's father turned him into police, but they have not released his name so far. 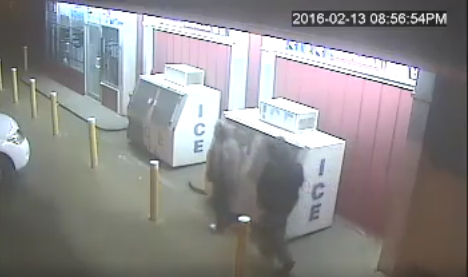 City leaders said investigators were able to track the suspects' every move, largely because of security cameras that police said caught the shooting.

The security camera video shows two men slowly making their way into the Corner Grocery across from the Clarksdale City Hall.

City leaders said those are the men who robbed the store and then took off running across the parking lot and down the alley.

Luckett said Couch saw the larger suspect, the one seen limping in the video and tried to stop him behind a nearby church.

Luckett said that man with the limp shot the officer, the bullet going through his eye socket into his head.

"I actually saw video of the officer being shot, it's grainy and long distance, but it's obvious what happened," Luckett said.

Security cameras at the store and in the alley and even the mayor's law firm helped investigators build their case against the shooter. The suspected shooter's father saw it and turned him in to police.

So many who know the officer are prayers he pulls through, and grateful the video was there.

"It's sad that a man trying to do his job and he gets shot," said Ralph Jackson, who also knows Couch. "It was a lucky shot. I don't think they were aiming, and they just turned and shot."

Obviously, investigators aren't showing all that video footage, but they're certainly using it to help them solve the case.

Police are still looking for the second robbery suspect.

MEMPHIS, Tenn. — Memphis Police say one person is dead after a shooting at a Fox Meadows apartment complex.

Police say officers responded to the scene at The Trails at Mt. Moriah just after 7 p.m. Thursday evening.

BILOXI, Miss. (The Sun Herald) — Authorities in Mississippi say five teens accused of fatally shooting a 16-year-old at a Biloxi home told police they were trying to steal marijuana.

Biloxi police investigator Larry Barnum told The Sun Herald that the victim, Madison Harris, was set up to be robbed and was fatally shot in the hip on Sunday.

MEMPHIS, Tenn. — In Memphis, the Lewis family is the perfect example a black-owned business with rich history.

Exclusive poll shows Joe Biden with double-digit lead in S.C. ahead of primary

Man accused of jumping onto driver’s car on purpose

Woman charged with child abuse after police say she grabbed son by hair, repeatedly punched him in the face