MEMPHIS, Tenn. — Violent rapists have walked free for decades because Memphis authorities neglected to do anything with thousands of pieces of evidence that would lock them up.

But earlier this year, after hundreds of cases began moving through courts again, Memphis City Council members stopped getting regular updates on their progress.

The rape kit backlog has caused the Criminal Justice Center to be slammed with cases that should have been on the docket years, if not decades, ago.

One of those cases includes Terrell Jackson. He stood before a judge Tuesday after police arrested the registered sex offender in Louisiana. 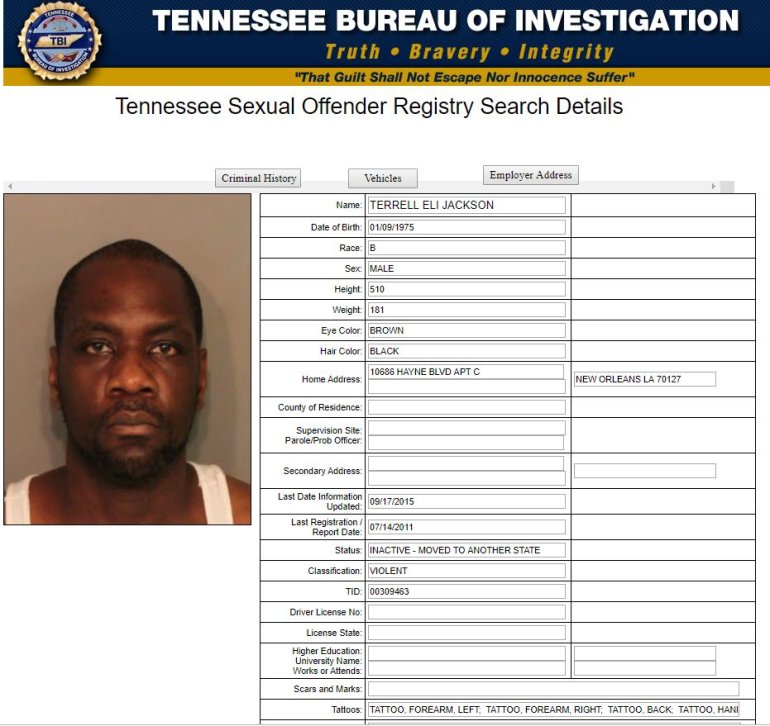 A jury recently convicted him of violently raping a young woman in Memphis in 1998. Jackson requested a new attorney for another rape charge he’s facing.

Jackson walked free all this time, because MPD never did anything with the key evidence.

It was one of 12,000 kits police left on a shelf to collect dust until WREG exposed the massive backlog in 2010.

“I woke up to somebody standing over me. I thought, I’m dreaming. I’m really going crazy,” said Terilyn Blockman, who was raped in her apartment in 1991.

“Next thing I knew, he had his hand over my face. He was strangling me. I was trying to peel his hand off me. I thought, if I don’t get this hand off of me, I’m going to die. I’m suffocating,” she said.

Blockman said the man then raped her and took off. He left her numb, just lying there as she tried to gain the courage to call 911.

“I’ve got to call police. If he still is somewhere in my condominium, I don’t want to call police, because what if he comes in and says, ‘You’re not calling police’ and kills me,” she said. “I never slept. I don’t remember sleeping at all. I still don’t sleep.”

Blockman consented to a sexual assault examination, and evidence was collected, but she didn’t hear anything until May when she found out her kit was in that backlog and was finally headed to a lab.

“All of the kits have been tested. Now, the work turns to investigating those cases where the testing lead us somewhere,” Shelby County District Attorney Amy Weirich said .

Weirich said she’s added more people to her team as their work continues to ramp up.

As of Oct. 25, there have been 83 guilty pleas or convictions.

Three hundred fifty-one kits made their way to the court system — two dozen await a grand jury, 88 await trial and 46 of the cases are dealing with a suspect accused of at least two or more rapes.

“The number is going to keep growing. The cases that land on our desk to prosecute and hold these defenders accountable,” said Weirich.

WREG investigators promised to track the progress, but the city, in spite of its commitment to transparency, made that job harder.

For the past several years, city leaders provided updates on the backlog to the council every month — that is, until April, when we found out those updates suddenly stopped.

We asked council members why.

“We got to a point that our responsibility with those kits had run its course. Now, it is in the hands of the justice system,” said Councilman Worth Morgan. “The reports all started sounding the same.”

“Well, I think there’s one of those things. There is an expectation. You do raise a good point. I guess we need to go through the trust then verify,” he responded.

“The council decided they don’t need monthly reports, after they were sure for a few years the momentum of lab work was underway,” Clubb said.

She said the task force has made major strides with new ordinances/laws, public service announcements and getting MPD a new storage facility.

“We have a few years of work, and we’re not giving up. We’re not stopping,” she said.

But again, how will we know if that work isn’t being made public?

“We do have concerns that the public isn’t seeing what progress is happening. We are just beginning to address that,” she said.

Blockman was frustrated to hear the updates stopped.

“Not letting us know what’s going on with the kits and not keeping us informed, that’s not fair. That’s not right,” she said.

She also wonders what about the rape kits taken since the backlog.

MPD says they ensure each kit now heads to a lab within 96 hours after its logged into the property and evidence room.

But the state has said the waiting period could be months due to funding and staffing issues.

Not to mention, the TBI says they “do not have an existing document or database tracking the total number of sexual assault kit submissions.”

“That upsets me a lot,” said Blockman.

She believes her concerns will eventually fade, once trust is built again.

“Are you afraid they’re going to forget about you again?” WREG asked.

Blockman said she has a meeting coming up with investigators, so she’s keeping a good thought. She also joined a class action lawsuit against the city.

The task force told WREG Tuesday they plan on having another update on the city’s website by the end of the year. We will let you know if that happens.

Facebook announced Thursday it was banning ads from The Committee to Defend the President, a pro-Trump super PAC. Facebook did not say how long the ban would last.

"As a result of the Committee to Defend the President's repeated sharing of content determined by third-party fact-checkers to be false, they will not be permitted to advertise for a period of time on our platform," Facebook spokesperson Andy Stone said. Stone declined to say what specifically led to Thursday's action.

Four employees at two Mississippi food processing plants have been indicted on federal immigration-related charges on the eve of the one-year anniversary of what prosecutors called the largest single-state immigration crackdown in history.

The raids made headlines around the nation as many children, on the first day of school, were separated from parents who were rounded up in the operation.

WASHINGTON (NEXSTAR) — If you were hoping to have your next $1,200 stimulus check by now, you're out of luck. Washington talks on vital COVID-19 rescue money are teetering on the brink of collapse after a marathon meeting in the Capitol generated lots of recriminations but little progress on the top issues confronting negotiators.

“There’s a handful of very big issues that we are still very far apart" on, said Treasury Secretary Steven Mnuchin. He talked of impasses on aid to states and local governments and renewing supplemental unemployment benefits in the Thursday night meetings.

Woman who says she has COVID-19 evicted from Raleigh home

Chip and Joanna Gaines are bringing back ‘Fixer Upper’