Attendees at the packed meeting said they were upset that an August 12 “Unite the Right” rally was allowed to happen.

Demonstrators stood on the dais and unfurled a large banner that read, “BLOOD ON YOUR HANDS.” The meeting was briefly suspended. 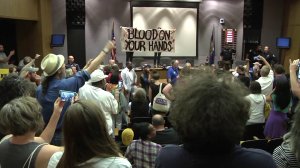 Speakers at the council meeting said police seemed to stand by as neo-Nazi marchers and other white nationalists demonstrated.

Many at the contentious meeting on Monday also urged the city to pull down the remaining Confederate monuments in Charlottesville, following the lead of Baltimore and other cities.

“Why do these cities have more moral clarity than we do when we had a Nazi rally in our town?” one resident said.

A Virginia law prohibits cities and people from disturbing or interfering with monuments — a challenge that Charlottesville officials mentioned.

The council also voted unanimously to drape the Confederate statues in black, to mourn the lives lost during the August 12th rally, according to Charlottesville City Council Member Kristin Szakos.

Police said James Alex Fields Jr. rammed his car into a group demonstrating against the “Unite the Right” rally, killing Heather Heyer and injuring 19 others. Two Virginia state troopers were killed in a helicopter crash nearby after monitoring events.

Fields, 20, has been charged with second-degree murder and other offenses. His next court appearance is Friday. 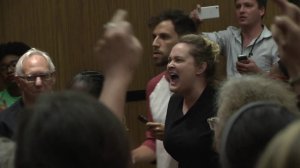 Emotions ran raw during the meeting that spanned for hours with many chastising the city council and the police department.

At one point, the meeting was suspended as the crowd was “called to order.” Mayor Mike Signer said people who spoke out without being recognized would be removed.

“What’s the alternative?” Signer asked. “For everybody to shout and scream?”

One woman had already been told she would be removed because of her outburst.

At that point, the council suspended the meeting and the members left the chamber.

When the meeting resumed, speakers one after another berated the council members for not heeding community concerns before the rally.

“How many times did we say this s*** was going to happen?” one speaker asked. 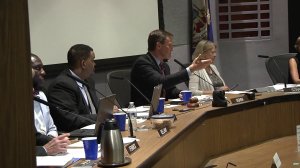 City officials said they had tried to force the “Unite the Right” rally out of downtown Charlottesville.

The matter was taken to court with the ACLU representing the organizer of “Unite the Right,” as the group fought the city’s attempt to revoke its permit to gather at a downtown Charlottesville park. US District Court Judge Glen Conrad rejected the city’s revocation.

But the explanation that a federal judge had forced the city to allow the rally didn’t placate people who gathered at City Council.

“Why did you approve it in the first place?” a person in the audience asked.

“What are you going to do when they come back?” another asked.