NEW YORK — The Centers for Disease Control is sounding the alarm over a new report that finds the number of people getting sick from bug bites is spreading rapidly.

Infections from mosquitoes, ticks and fleas have more than tripled since 2004 and at least nine diseases have been reported for the first time in the U.S.

“Warmer temperatures can lead to a longer breeding season. And that can allow things like ticks and mosquitoes to spread geographically,” said Dr. John Lapook. “Also the world is getting smaller and smaller, there’s so much travel.”

The 16 diseases tracked by the CDC include well-known diseases like Lyme and Zika — which have seen a dramatic rise since 2004. Lyme disease alone accounts for 63 percent of the illnesses tracked with cases doubling to about 36,000 a year.

The CDC says because of under-reporting the real number is likely closer to 300,000.

“This is something that so many of us worry about, especially with our kids running around outside.” 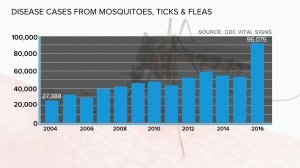 Father’s Day in Memphis: Families express what the special men in their lives mean to them

MEMPHIS, Tenn. — This Father's Day, families across the Mid-South stepped out to show the special men in their lives how much they're appreciated.

Last year, the holiday fell right in the middle of the pandemic but what a difference a year makes, as restaurants and businesses were full of a lot of satisfied fathers.

Timeline of the search for Summer Wells

More than 100 personnel and 41 agencies have been involved in the search for Wells since she was reported missing from her home in the Beech Creek community Tuesday night.

Will Smith opening up, releasing memoir ‘Will’ in November

LOS ANGELES (AP) — Will Smith is ready to open up about his life story.

Penguin Press announced Sunday that Smith will release his memoir called “Will” on Nov. 9. The actor-rapper shared a photo of the book’s cover art to more than 54 million of his followers on Instagram.

There’s a castle for sale in Indiana

These cars have the most loyal owners

What are the most popular smart home devices?

In a seller’s market, experts urge buyers to do these 3 things before placing an offer

Father’s Day in Memphis: Families express what the special men in their lives mean to them

Timeline of the search for Summer Wells

Will Smith opening up, releasing memoir ‘Will’ in November