Laura Smith and her children were gathered around the Christmas tree in their home on Whitney Avenue when it happened. 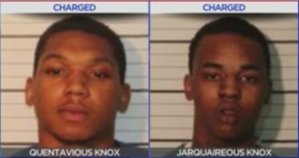 "It was a loud noise. I'm talking about the loudest noise you ever heard," Smith says.

The car, a Pontiac, stopped feet away from Smith's 4-year-old daughter and 12 and 6-year-old sons, who were opening presents at the time. Panicked, she whisked her kids away to a bathroom in the back of the house.

"I had to get the kids to safety," Smith says.

Investigators say Quentavious Knox and his cousin, Jarquaireous Knox, crashed the Pontiac while being chased by police. Both of them bailed out of the car before it hit the wall.

"They ran through the backyard and tore down the fence and everything like that," Smith says.

Investigators say they stole the vehicle at gunpoint nearly two hours earlier from a man parked in the driveway of his New Chicago home. Police spotted the car a couple miles away and chased the suspects when they sped off.

The two cousins were eventually found hiding in a nearby storage shed after crashing into Smith's house and taking off on foot.

"They were real young," Smith says.

Quentavious is 22 and his cousin is only 17. Both are now facing serious charges that include carjacking and reckless endangerment.

"They got a lot of growing up to do," Smith says.

The crash happened Christmas Eve morning, which is when Smith celebrates with her children.

"I'm glad we're all okay," she says, "It was a Christmas miracle, basically, because it could have ran us over."

SpaceX has signed a deal with a space tourism company to organize a trip orbiting the Earth for a handful of adventurous travelers.

Space Adventures — which organized eight tourism trips to the International Space Station between 2001 and 2009 — plans to help organize a flight for four people aboard SpaceX's Crew Dragon spacecraft. The trip could take place in late 2021, according to a press release and video Space Adventures released Tuesday.

NEW YORK — The United States ranks lower than 38 other countries on measurements of children's survival, health, education and nutrition -- and every country in the world has levels of excess carbon emissions that will prevent younger generations from a healthy and sustainable future, according to a new report.

The report, published in the medical journal The Lancet on Tuesday, ranked 180 countries based on a "child flourishing index" and the United States came in at No. 39.

WGN spoke exclusively with Blagojevich as he arrived to the Denver airport to catch his flight home to Chicago.