St. Jude and ALSAC currently have a multi-billion dollar expansion plan underway and recent grants from the state.

"Obviously, they not only provide employment, but great research and a lot of services to children," said Governor Bill Haslam in regards to the recent $12 million from the state.

However, St. Jude can`t stand on its own.

They're now looking to clean up those areas under the Bicentennial Gateway Project. 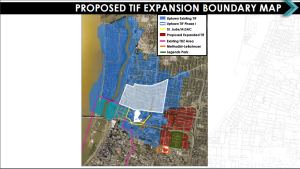 They want to revitalize the areas surrounding St. Jude for the patients, workers and families. They`re applying to expand the TIF in place, which is a zone that benefits from property taxes.

They`re hoping to expand the TIF to the Carnes neighborhood, adding into the current improvement plan of Uptown.

They'll clean up the blight in the neighborhoods and remodel/build new housing.

"I'm excited about all of it," said Paul Young, director of Memphis Housing & Development. "I think it's just such a significant opportunity for us to take investments we're already making and do it in a smarter way."

The improvements to those areas will be funded by money from the sales tax or tourism development zone funds (TDZ) and now community leaders are asking the state if Mud Island and the Riverfront can be added to the list as well.

"We want to roll it all up into one major initiative for this community," said Young.

Some of the goals include remodeling the Convention Center and turning Mud Island into more of an attraction, with water or fire displays.

They also want to do more with the Riverfront as a gathering place.

"We see it being very holistic," said Young. "It's focused on tourism, is focused on community development, jobs, all of the things that make our city and county and state vibrant."

The city has held multiple public meetings to come up with a vision for the Pinch District to feel more like an extension of downtown while being a lure for visitors.

Young said they`ve committed $12 million to the Pinch from TDZ, which comes from money generated by the sales tax.

"It's my sincere desire that the Pinch District will be a great place to live, work and play," said Shadyac. 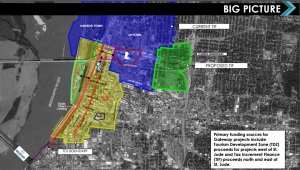 The goal is to keep the area's historic culture while vamping it up with shops and making it more connected to nearby neighborhoods, including St. Jude, which owns about half of the land in the Pinch and is part of the vision ahead.

The trolley is also expected to be back up and running within a year or two.

"Do it in a way where we take this community to the next level," said Young.

For a full look at what was presented, go here.

"Absolutely not. It was kind of out of the blue," Hellman told CNN.

If you can't see the live player above, click here.

NEW YORK (AP) — The U.S. death toll from the coronavirus climbed past 3,500 Tuesday, eclipsing China’s official count, as the deepening crisis in New York hit close to home for the governor when he disclosed, teary-eyed, that his brother, CNN anchor Chris Cuomo, has become infected.

“But there’s a lesson in this,” Gov. Andrew Cuomo said of his 49-year-old brother, now quarantined in his basement. “He’s an essential worker, a member of the press so he’s been out there. If you go out there, the chance that you get infected is very high.”

Coronavirus case count: At least 2,239 cases confirmed in Tennessee; 937 in Mississippi; 508 in Arkansas