Police say she was headed south on Third Street and was almost hit by a man merging into her lane near the Mitchell intersection. Investigators say he got so angry that he pulled alongside her and fired several shots into her car before driving off.

Police still haven’t caught the gunman. That’s why they posted the below picture of his car and the victim’s car on social media. They hope it’ll generate leads. 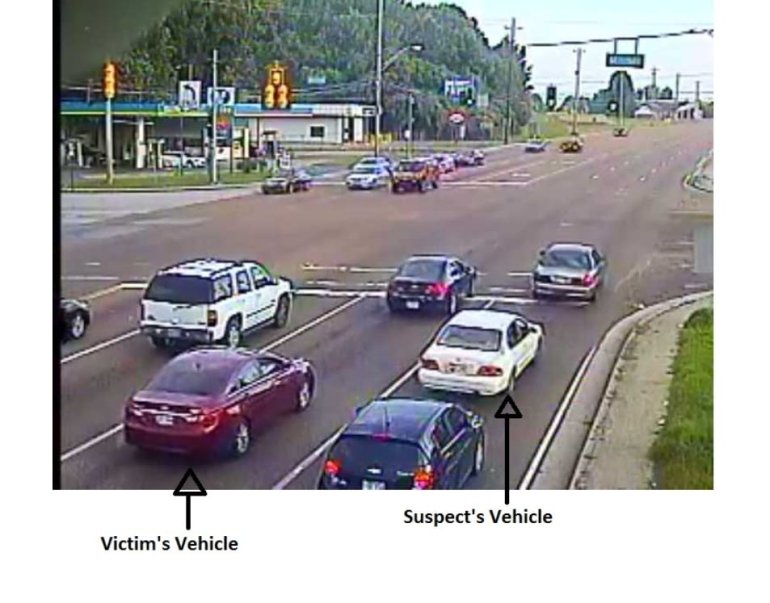 Complete strangers are horrified by the story.

“I think she was thinking probably her life was about to end,” Randy McGee said.

This road rage incident is one of at least four WREG has covered in Memphis this month, including one involving a man named David Jayne. He says an angry driver pulled a gun on him at the intersection of Summer and White Station Road.

“I couldn’t tell what she was saying, but she was totally cussing me the whole time, you know, as she was pointing her gun,” he said.

She was arrested after Jayne flagged down an officer sitting next to them waiting to turn. The woman told police she was mad because Jayne cut her off.

“You do something over that petty and now it’s really gonna cost her a lot,” Jayne said.

It’ll cost the driver in this latest case a lot too if he gets caught.

“You got criminal charges and all that,” McGee said. “All because you was hot headed for ten seconds.”

If you recognize the white car in the above picture, or if you know anything else about this incident please call Crime Stoppers at 901-528-CASH.

JACKSON, Miss. (AP) — At least 26 legislators and 10 others who work at Mississippi's Capitol have tested positive for the coronavirus, a public health official said Wednesday, as the governor implored residents to take precautions amid a rapid rise in confirmed cases statewide.

The 174-member Legislature ended its annual session July 1, and many people in the Capitol did not wear masks or maintain distance between themselves and others during the last few weeks. Lt. Gov. Delbert Hosemann and House Speaker Philip Gunn are among those who publicly acknowledge testing positive for COVID-19. They are now quarantined at home.

MEMPHIS, Tenn. — As murder and other violent crimes continue to plague the city of Memphis, law enforcement and citizen groups are working to bridge the gap between police and people in the streets.

Even with COVID-19 restricting residents and social justice protests marching across the Mid-South, violent crime continues to take lives in Memphis.

One killed, one injured in North Memphis shooting; suspects on the run

Here’s how to volunteer for a COVID-19 vaccine trial

Officer to Floyd: ‘It takes … a lot of oxygen to talk’

Mother seeks justice after daughter shot on I-240 at Poplar

One killed, one injured in North Memphis shooting; suspects on the run

Here’s how to volunteer for a COVID-19 vaccine trial