DYESS, Ark. — In the middle of rice fields, the modest home of a country icon is not only a glimpse of his life, but a snapshot of a greater story.

Johnny Cash’s boyhood home in Dyess was added recently to the National Register of Historic Places.

The house is owned by Arkansas State University, which spent $575,000 to buy, restore, furnish and landscape the property.

It now provides hundreds of visitors from across the nation and the world a glimpse into the making of The Man in Black.

But the Cash home is just part of a federal resettlement area for Delta farmers called the Dyess Colony.

One of many of those programs was resettlement communities that relocated the poor to a new home and provided a job that allowed them to feed their families.

In 1934 more than 500 poverty-stricken families received a new start as part of these federal agricultural resettlement communities.

“So Mr. Cash came here and got his 20 acres, no money down, and the government financed everything,” Sims said.

Each family would buy back their home by planting cotton and farming.

The Cash’s home only had one light bulb and, although faucets were installed, Sims says they were never connected to water.

Sims says that at one point seven mills were producing 65,000 feet of lumber for Dyess residents to build their houses.

The Cash family was one of the original 500 families who moved to the colony.

All for one and one for all 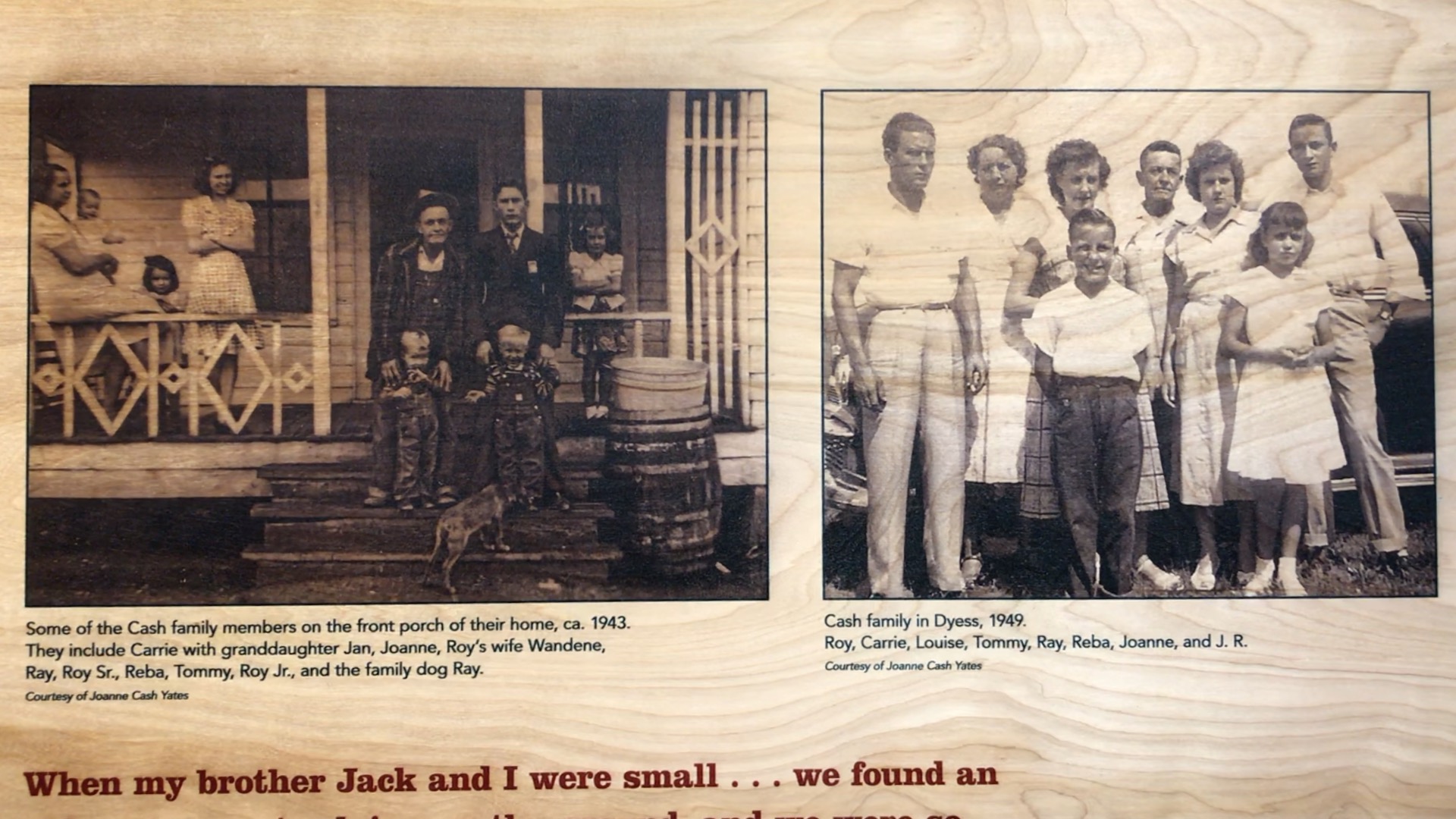 Life in the colony was difficult but Sims says for these families, it was everything.

“It meant a lot to these families who didn’t have anything during the ’30s,” Sims said. “This was something good for them. They never had a new house before.”

The families faced hardship from floods and droughts throughout the years. Many families only lasted several years due to the difficult farm life.

Sims says despite all that hardship families still found opportunities to find joy.

The colony circle included an administration building, cotton gin complex, a theater and something the kids called the pop shop.

The women often gathered inside their homes with others to make quilts for their families to use on their beds.

All of which brought the families in the communities together and made the hard times easier, Sims says.

The lesson in the history

The man we know as Johnny Cash was known to his family and boyhood friends as J.R.

Cash’s childhood home is what shaped the music icon and why hundreds of people visit the historical town every month.

Elvira Van Poelgeest, a Johnny Cash fan from the Netherlands, saw the Cash home before Arkansas State began remodeling it in 2014.

She says that it allows fans and visitors to connect to the country singer’s life.

“For me it is about the feeling. You know, being able to walk around where he walked around, see the town where he grew up, went to the movies, went to school,” she said.

Nancy Ertel, from Maryland, says that it was emotional for her to visit the home.

“You look around, you can almost see the family in the cotton fields and you can just feel more deeply what he is actually singing,” Ertel said.

Ertel says that even those who aren’t Cash fans can find something interesting by visiting the Dyess Colony.

“The history that you get of what life was like back in that area, I don’t know anywhere else you can go and get that,” Ertel said.

Ertel says that for visiting Cash’s boyhood life is a lesson in life. She says that all of us, at some level, experience tough times.

“We see how this family grew out of those tough times, and I think that there are lessons that we can learn from that in terms of persistence and rising up out of struggle,” Ertel said.

“There is hope. You can grow.”

MEMPHIS, Tenn. — We now know what happened the moments after inspectors discovered a significant crack in the I-40 bridge. WREG has obtained audio from two 911 calls placed just minutes apart Tuesday afternoon.

The first call was made by a man who said he was doing an inspection on the Hernando DeSoto Bridge and needed to get people off the bridge as soon as possible.

(NEXSTAR) – A 2-year-old boy injured both parents and himself after firing a handgun he found on a nightstand in a West Bath, Maine home Wednesday morning, police said.

Officers responded to the residence around 8 a.m. according to the Bangor Daily News. The child's mother, 22, was struck in the leg and his father, 25, sustained a minor injury to the back of the head, according to police.

SHELBY COUNTY, Tenn. — A man was charged with DUI after a wreck Monday that killed a Nashville man in southeast Shelby County.

Trench Blevins, 26, was arrested and charged with Driving Under the Influence and Failure to Exercise Due Care, the Shelby County Sheriff's Office said Wednesday.

I-40 bridge shutdown in Memphis could be ‘potential disaster’ for shipping, economist warns

Memphis in May barbecue contest returns to the riverfront

Applications to get $50 off your internet bill open

Traffic, truckers impacted by I-40 bridge closure over Mississippi River

ARDOT officials give update on I-40 Mississippi River bridge closure, no estimate on time to reopen