CLARKSDALE, Miss. — He’s supposed to be a superhero, but the Captain America one Clarksdale homeowner encountered was up to super mischief, police say.

The homeowner, a former Marine and corrections officer, said he caught a man dressed as Captain America trying to break into his shed on the 1500 block of Lee Drive around 3 a.m. Tuesday.

The homeowner told WREG he ordered the intruder to the ground and held him for police. 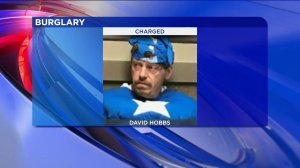 Police have charged David Hobbs with burglary and are holding him at the Coahoma County Jail on a $25,000 bond.

Although not visible in Hobbs’ booking photo, the homeowner insists Hobbs was also wearing fairy wings at the time of his arrest.

“It’s just crazy, you know,” neighbor Otis Wilborn said. “You come out at that time in the morning, and someone’s prowling around on your property. You know, you’ve got a family you’re trying to protect.”

Multiple people told WREG that Hobbs frequently roams the neighborhood alleys and has even attempted to break into other people’s sheds, but they said he usually isn’t wearing a costume.

“Normally, I see him, he be straggly looking with jeans and a t-shirt or something like that,” said a woman who didn’t want to be identified.

The Mississippi Department of Corrections confirmed Hobbs is already serving three years of probation for a grand larceny charge out of Quitman County.

Pinson became the first opponent to score more than 20 points against the Volunteers this season. Dru Smith added 18 for the Tigers, who improved to 10-2 overall and 4-2 in the SEC. Yves Pons paced Tennessee with 20 points. Victor Bailey and Josiah-Jordan James each scored 12 for the Volunteers, who have lost their last two games to fall to 10-3 overall and 4-3 in the SEC.

MEMPHIS, Tenn. — Elected officials and a worldwide music star, Lil Baby, came together to give back to the Memphis community in a much-needed time.

LOS ANGELES (KTLA) – A multi-agency investigation in Southern California led to the recovery of 33 children who had been missing, including eight who were sexually exploited, the FBI announced Friday.

Two of the children were rescued multiple times during Operation “Lost Angels.” They were apparently on the “track,” a term used to describe a known location for sex trafficking, officials explained.

Majority of U.S. Catholics say abortion should be legal in most cases, survey shows