MEMPHIS, Tenn. — A police officer in Helena-West Helena, Arkansas, who was seen in a viral video pointing a gun at a man and dragging him out of a moving car was fired from the city’s police force for violating department policy.

Officer Terry Daugherty and his partner were conducting a stop in Helena-West Helena in the early morning of May 26, after a report that some vehicles were refusing to leave the lot of a closed gas station. 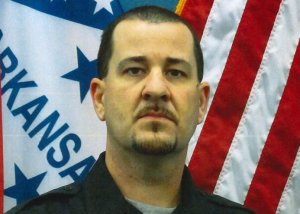 Daugherty asked driver Edrick Truitt for identification, and Truitt pulled out his phone and began filming the encounter.

When Truitt refused, Daugherty pulled out his service weapon and pointed it at Truitt, the city’s police chief said after an investigation. Later, he said he noticed a weapon in the back of Truitt’s car, according to a report by police.

That was in violation of the department’s minimum force policy, the police department said, because when Daugherty pulled out his weapon there was no indication that he was in imminent danger.

Truitt, who said he feared being harmed by Daugherty, was taken into police custody but released. Daugherty was placed on suspension pending an investigation.

Chief of Police James Smith recommended dismissing Daugherty in a letter to the city’s mayor June 11. Monday, Mayor Kevin Smith sent a letter to Daugherty terminating him from his job effective Aug. 9.

His partner resigned from the force July 26, and other officers were disciplined, police officials said.

No charges have been filed against Daugherty.

Summer is here, but social distancing measures are putting a damper on the usual seasonal activities, so Walmart is providing some big-screen relief.

Teaming up with Tribeca Enterprises, the retailing giant is turning 160 of its store parking lots into drive-in movie theaters.

Former 2012 Republican presidential candidate Herman Cain is receiving treatment for coronavirus at an Atlanta-area hospital, according to a statement posted to his Twitter account.

Cain, a contributor for conservative media outlet Newsmax, was hospitalized Wednesday "after he had development symptoms serious enough that he required hospitalization" and was informed Monday that he tested positive for the virus.

(CNN) -- The world may have changed drastically over the last few months due to the pandemic, but the laws of combustion have not.

While hand sanitizer has become an integral part of the daily routine for countless people around the globe, it could make for a painful combination this Fourth of July when fireworks come into play.

Safety measures to keep in mind this Independence Day weekend

A friendship to remember: A failed cattle dog and a downed calf won’t leave each other’s side