.GERMANTOWN, Tenn. — He fought a battle no child should and now one local boy has been rewarded.

John Hobbs, son of French Hobbs the former coach of the Germantown High School baseball team, has been given the “Red Devil Courage Award.”

The award, given Wednesday night, happened after the family learned John is cancer free.

Hobbs currently coaches at Center Hill High School, but when his youngest son was born, he was coaching at Germantown High School.

John, who is only two, was battling for his life before he was ever diagnosed for with cancer.

Elizabeth Hobbs told WREG her pregnancy with John was so complicated it caused her to go into a coma for three months.

“French was making arrangements for my funeral, rather than planning for John’s arrival,”  she said.

During this time, the GHS Baseball family took care of not only Mr. Hobbs but also his three daughters.

“Coach Callaway and the rest of the coaches really took care of me and let me put my family first. It was truly a blessing to be coaching so close to the hospital and have people who would do anything to help me,” said Hobbs. 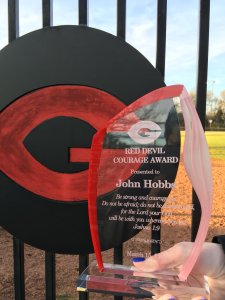 John was born in November of 2014, and in August of 2016, he was diagnosed with mesenchymal chondrosarcoma which is a rare form of bone cancer.

After 8 months of cancer treatments at St. Jude, he was declared cancer free.

GENEVA (AP) — A top official from the World Health Organization says Europe has surpassed 1 million deaths from COVID-19 and the situation remains “serious,” with about 1.6 million new cases reported each week in the region.

Overall, a tally by Johns Hopkins University shows nearly 3 million deaths have been linked to COVID-19 worldwide -- with the Americas hardest hit, followed by Europe. The United States, Brazil and Mexico have reported the highest number of deaths, collectively at more than 1.1 million.

SOUTHAVEN, Miss. — A Southaven Police officer was arrested after allegedly being involved in a domestic violence incident.

According to the Southaven Police Department, officers were called to a home on Cat Tail Drive in Southaven during the evening hours of April 10 and discovered Tyrone Roper, 25, was allegedly involved in a disturbance.

NASHVILLE, Tenn. (WKRN) — CDC data reveals vaccine hesitancy is high in Tennessee as our state has one of lowest rates of fully vaccinated adults in the country.

Despite Johnson & Johnson vaccines being replaced by Pfizer at most locations in Middle Tennessee, some residents remain apprehensive.

Tractor trailer overturns on I-40 near Watkins

‘Master manipulators’: Predators are hiding where you live

Tractor trailer overturns on I-40 near Watkins

‘Master manipulators’: Predators are hiding where you live