MEMPHIS, Tenn. — The Memphis 901 FC fell Saturday by a score of 1-2 after a late goal from North Carolina FC.

NCFC goalkeeper Alex Tabakis deserved to be named man of the match after seven athletic saves to keep Memphis from scoring a second goal.

Newcomer Pierre da Silva exposed the nervy back line when he weaved his way into the box one minute after kickoff. He sailed his shot high and wide but sent an early message to NCFC.

Head coach Tim Mulqueen instructed his team to press high and force the North Carolina back-line out of their comfort zone.

At the 20-minute mark, the tactics proved successful. Adam Najem won back possession and simultaneously earned a free kick. 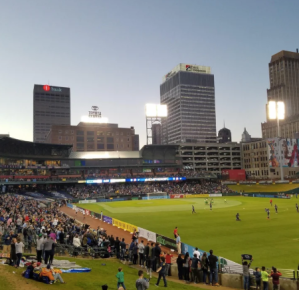 Veteran captain, Marc Burch curved in a high free kick from 30 yards out, and NCFC was punished for lackluster defending.

Allen’s strike was his fourth of the season. He is now one goal shy of being tied for team’s leading goal scorer.

The 901 FC continued to press and win corner kicks.

Tabakis, the USL Championship Fans’ Choice Mid-season Goalkeeper of the Year, made two back-to-back saves in the 37th minute.

He saved a powered shot from Allen and subsequently saved a close-range header from Wes Charpie.

Marcus Epps, one minute later, was unmarked at the near post and bounced his header off the goalpost.

A second goal was imminent, and Memphis had all the momentum heading into the second half. Then disaster stuck.

NCFC forward Donovan Ewolo attempted a bicycle kick inside the box. The shot did not have much power, but the ball awkwardly squirmed under Caldwell’s legs and across the goal line.

Epps should have scored in the opening minutes of the second half, but Tabakis once again pulled off an athletic stop.

Allen scored on the follow-up, and the goal was disallowed, as the head official signaled for a handball on the striker.

The match slowed for the next 20 to 30 minutes as both teams opted to play more defensive.

Epps was the impact player in the second half. He completed five out of six dribbles and unleashed three shots.

His shot in the 78th minute was one of the best looks of the match, but Tabakis came up big again.

The match slowed as added time neared, and NCFC took advantage of essentially their third clear-cut chance of the match.

NCFC midfielder Ben Speas sliced through the midfield with a through ball, and Nazmi Albadawi connected with his left foot to beat Caldwell at the far corner.

Heartbreak ensued once again for the Memphis players and the 7,006 fans in attendance.

Substitutes Lagos Kunga and Jochen Graf managed to combine for two shots in added time but to no avail.

The 901 FC remain six points out of the final playoff spot in the Eastern Conference.

Memphis has six days without a match before the team travels to play the Birmingham Legion FC on August 17.

For millions of Americans, a job doesn't only mean a paycheck -- it also provides their health insurance.

As unemployment surges amid the coronavirus pandemic, many laid-off workers will have to find new coverage -- a critical protection as more than 180,000 Americans test positive and many are hospitalized.

NEW YORK — Kroger announced it will provide all of its grocery, supply chain, manufacturing, pharmacy and call center associates a Hero Bonus as they continue to work during the outbreak.

According to the company, $2 will be added to the standard pay rate for all hours worked from March 29 to April.

The US Army has begun calling up members of the Individual Ready Reserve on a voluntary basis in order to help combat the spread of the novel coronavirus, another sign that the US military is seeking to bolster its medical capability as the pandemic continues to spread.

"On March 29, Human Resources Command sent messages regarding the voluntary recall to nearly 10,000 members of the (Individual Ready Reserve) with specific medical skills," Lt. Col. Emmanuel Ortiz told CNN in a statement. Military.com was first to report on the voluntary call up.

Elliot Stabler is back in a ‘Law & Order: SVU’ spin-off

Coronavirus case count: At least 2,239 cases confirmed in Tennessee; 1,073 in Mississippi; 566 in Arkansas

Carnival says it still has 6,000 passengers on ships, some will not disembark until late April