The March for our Lives was part of a nationwide movement started after 17 students and staff members were massacred at a Parkland, Florida school last month.

The rally shut down much of the downtown area for hours Saturday morning, as protestors marched from Clayborn Temple to the National Civil Rights Museum.

Marchers carried signs reading "My Outrage Can’t Fit on This Sign," "Not One More," and "Books not bullets," and chanting "No more silence, end gun violence!" and "Enough is enough!”

"Just to know that at any time, I could be next, my sister, anyone in my school, is just not ok," said high school student and organizer Hali Smith with Students Demand Action.

If their signs didn’t make it clear they’ve had enough, their impassioned pleas for change certainly did.

"We’re trying to save lives," said Katy Spurlock with Moms Demand Gun Sense in America. "This group believes in the second amendment, but you have to have some regulation of weapons in this country."

Even educators joined in.

"Kids should not have to worry about, 'Will I make it out of school alive or not?'" said Stephanie Gatewood, an administrator at Sharpe Elementary School.

She echoed the sentiments many teachers have already voiced -- that they shouldn’t have to be responsible for protecting the lives of the children in their classrooms.

"Teachers want to teach," she said. "They don’t want to have to be the security guards." 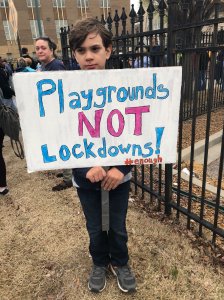 Once marchers reached the National Civil Rights Museum, children and teens gave powerful speeches about their experiences with gun violence.

One little boy shared a story about his sister who was killed in a shooting.

"Me and my family miss her very much. Whoever killed her should be ashamed of themselves," he said.

Several people in the crowd were moved to tears by the speeches.

And while change may not happen overnight, these kids say they’re not going anywhere.

"It’s our sisters, our brothers, our mothers, our fathers that are being killed in these streets. So how don’t we have a voice on something that affects us so greatly?" Smith said.

Several Memphis schools are also planning walkouts on April 20 as part of a nationwide Day of Action.

An Oregon State Police Trooper was struck in the head by a large rock and suffered a head injury, police said in a release. The trooper's condition was not immediately known.

MEMPHIS, Tenn. — A Michigan man is making the trip of a lifetime and paddling more than 2,000 miles down the Mississippi River.

Nate Denofre has been paddling in his 17-foot canoe along the Mississippi River with only his wife, Christa, and his dog, Marci, for the past 90 days as they work their way to the gulf coast. He's not only making history, but he's also defying all the odds against him.

Reopening schools is easy. Keeping them open will be the hard part.

As educators prepare to welcome students back to class for the first time in months, schools’ ability to quickly identify and contain coronavirus outbreaks before they get out of hand will be put to the test in thousands of districts around the country.

Bradshaw to visit every Tennessee county in Senate run

Stimulus check update: Why we’re no closer to a second $1,200 payment

Police: Woman crashes car into tractor-trailer after another driver fires shots at her