MEMPHIS, Tenn. —  Residents in West Tennessee were jolted from their sleep this morning after a 3.7 magnitude earthquake hit Wednesday morning. 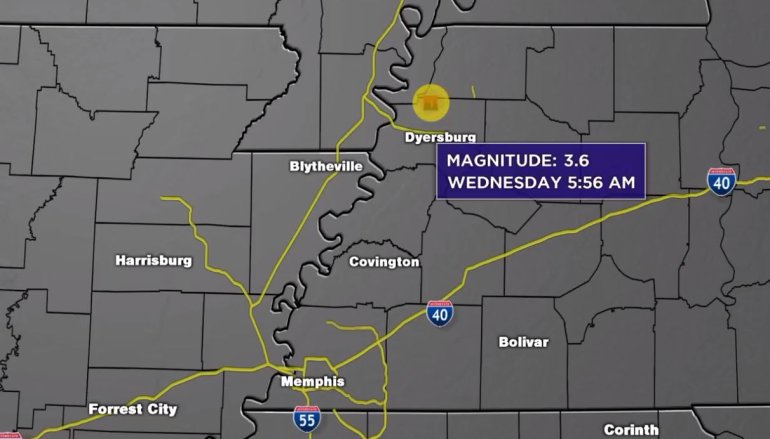 Several viewers from from Tipton, Lauderdale and Dyers counties called in to tell WREG that they felt the earthquake around 6 a.m. Each of them had a similar story, saying they heard a noise that one person described as a “freight train” and then were jolted by the tremors.

At H&S Market on South Main in Dyersburg customers were talking about what they heard and felt. “My house, it was just real loud like thunder and lightning,” a customer said.

During a phone interview, Kelly Sebastian told WREG that she and her husband were in their Newbern home when they heard a roar-like sound and then everything began shaking. She said she’s felt earthquakes before, but nothing of this magnitude.

WREG also spoke with Dyer County Sheriff Jeff Box who said the same thing. He said he has experienced other earthquakes before, but nothing quite like this. It was “pretty strong” but said so far they haven’t had any reports of damage in the area.

According to the National Weather Service, the earthquake was strong enough that it was felt as far east as Jackson, Tennessee and in parts of Kentucky.

If you felt this morning's #earthquake in NW TN, please fill out the #DidYouFeelIt citizen science reporting page https://t.co/PkLM8USi8G https://t.co/Imk5ehOUHG

It appears that the 3.6M earthquake was big enough to be felt as far east as Jackson, TN and parts of Kentucky. If you felt it, you can report it to @USGS via this link. https://t.co/xaKZd2YYGa pic.twitter.com/J4BAU1cGfu

We are lucky enough to have a seismometer in our backyard here at our office. This is the graph from the @UofMCERI helicorder. None of us felt it here, but you can clearly see the earthquake in green at 5:56 AM CDT this morning. pic.twitter.com/o63MiyVwcI

Ruth and her daughter contacted the provider last month, but said there's been no direct response to clear up the charges.

But that doesn’t mean teams aren't feeling the effect of the pandemic. Between players dropping out and new safety guidelines, it’s an unprecedented situation for high school coaches to handle.

The post in question shows a clip of Trump claiming during a Fox News interview that children are "almost immune" from COVID-19.

Driver wanted after woman run over in Whitehaven

Arkansas: Schools must be open 5 days a week despite virus

Virus testing in the US is dropping, even as deaths mount

Driver wanted after woman run over in Whitehaven