ALCORN COUNTY, Miss. — A 12-year-old Alcorn County girl is recovering from burns she suffered in an early morning fire that destroyed her family’s home.

Alyson Montgomery is in the burn center at Regional Medical Center with burns over 80% of her body. Her two brothers received minor burns, and they were glad to get out of the home, but now they hope their sister keeps fighting for survival.

“We got out right before it got to our bedroom,” 11-year-old Landon Montgomery said. “We rushed out, but it was hard.”

Landon and his brother, sister, mom and dad were all trapped in the inferno Wednesday morning.

“I was surprised to even get out,” Landon said. “I’m glad it didn’t go towards the front door. I stepped on the fire, and I jumped out because we had nothing but our bedclothes on.”

The mother and father jumped out a window, while Landon and his brother Dwight found themselves blocked by a locked door.

“All I seen was a bunch of fire and stuff like that,” Dwight said. “I had to run through the doors to get out.”

It wasn’t until that moment that everyone realized 12-year-old Alyson was still inside the home.

Alyson had become disoriented, and her mother ran back inside to find her.

“My grandson knocked on my door around 3:30 this morning, hollering and telling me the house was burning down,” said Travis Basden, the children’s grandfather who lives next door. “It scared me because my daughter came running across the yard to me saying, ‘My baby’s burned up, my baby’s burned up.’ I thought she was in the house, and that scared me to death. I run out, and she was laying in the yard, and I was holding her.”

Alyson is now hospitalized in critical condition with second and third degree burns over 80% of her body.

But Basden said there has been some good news from Alyson’s mom and dad. 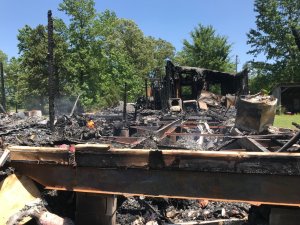 “My daughter still hadn’t got to go in and see her, but they’re working with her now, and they said she’s responding,” he said.

It’s still unknown what exactly caused the fire, which destroyed everything the Montgomerys owned. But rising out of the smoke and ashes is a strong sense of faith and thankfulness that everyone survived.

“These personal things can be replaced; life cannot,” Basden said. “My babies are safe, and that means the world to me. I give God the glory and thanks for what he done for me.”

There has been an outpouring of support from people who know the Montgomerys. The family has received donations of food and clothes, but the family could use more help.