Skip to content
Watch Now
Watch Now
Live at 9
This is an archived article and the information in the article may be outdated. Please look at the time stamp on the story to see when it was last updated. 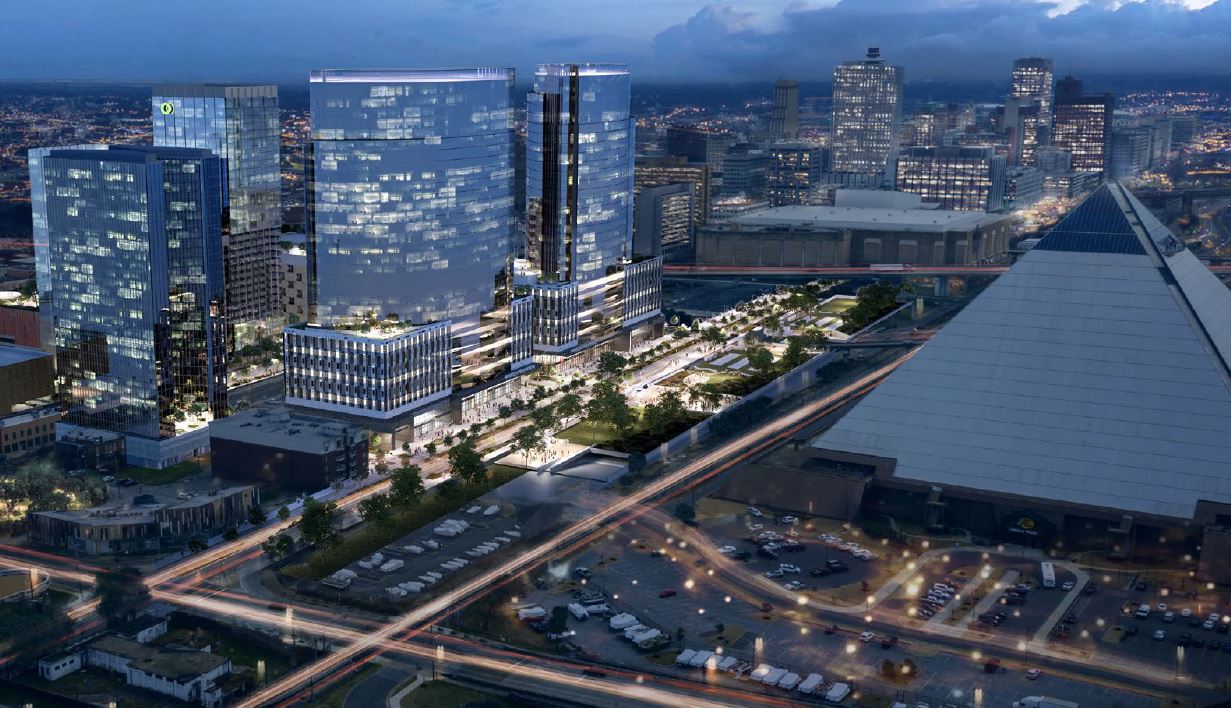 MEMPHIS, Tenn. — A New York-based developer released plans Wednesday for a $1.1 billion project that would transform the Pinch district on the north end of downtown Memphis.

Tom Intrator with 18 Main development said his company has spent about $14 million acquiring properties in the Pinch. It’s a historic neighborhood that has seen some restaurant and redevelopment activity over the years, but has also seen many properties sit vacant or demolished to be replaced with parking.

The plan is based around a 2016 study commissioned by the city, county and DMC to imagine the future of an area bounded by the Pyramid, St. Jude Children’s Research Hospital, Uptown and Harbor Town. Renderings show multi-story towers looming over areas now mostly occupied by parking lots or one-story buildings.

“This is about density and connectivity,” Intrator said. “We are building up and not out. We aim to create a new energy that will build upon itself.”

More than 1,500 residential units are included in the plan.

Phase I of development would cost an estimated $604 million, and Phase II estimates are $486 million, not including the costs of parking and infrastructure.

“We think the planned neighborhood will be a great amenity for residents in Harbor Town and Uptown, as well as St. Jude employees,” said Jennifer Oswalt, president of the Downtown Memphis Commission. “Tom Intrator and his team have created a concept that is truly unique, and that is something we look for in a developer partner.”

No timetable for the Pinch development was released.

Development is already beginning on the east side of downtown with the $1 billion Union Row project announced earlier this year.

MEMPHIS, Tenn. — The 2020 FedEx St. Jude Invitational will look a little different this year after organizers announced fans will not be allowed at the event.

“The well-being of everyone involved with the event and our community remains our top priority this year, and while we had developed a robust health and safety plan that would include limited spectators, we ultimately felt it was best to host the event without spectators this year,” said Darrell Smith, WGC-FedEx St. Jude Invitational Executive Director. “These decisions are never easy, and we would like to thank the city of Memphis, Shelby County, FedEx and the TOUR for their collaboration. We are still very excited about showcasing the world’s best players and the City of Memphis to a global audience and continuing our mission of raising funds and awareness for St. Jude Children’s Research Hospital through the event.”

SEATTLE - Seattle authorities have identified the remains of two people who were discovered by teens shooting TikTok videos last month.

The two victims, Jessica Lewis, 35, and Austin Wenner, 27, were shot days earlier, according to the King County Medical Examiner's Office. A family member said the two had dated for years.

The other six Tennessee counties, including Davidson, Shelby, Knox, Hamilton, Sullivan, and Madison, have locally-run health departments which have the authority to issue mask requirements if they feel it’s necessary.

8 arrested, including L.A. mother and her 4 children, for allegedly stealing $1.1 million in unemployment benefits fraud scheme

United Airlines sending layoff notices to nearly half of US employees