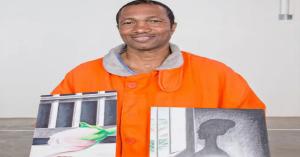 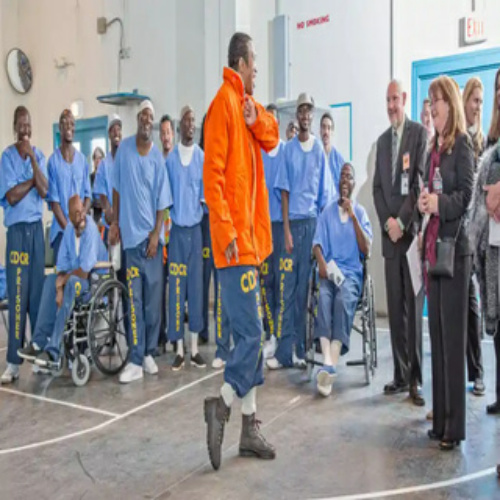 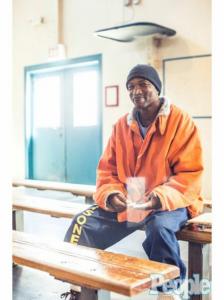 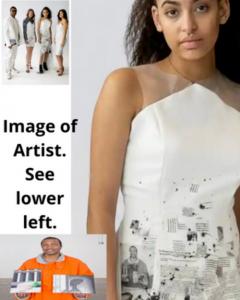 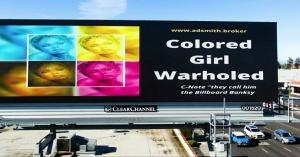 Cyber Monday has uniquely proven to be that one time of the year e-commerce thrives, including the online acquisition of Art World must-haves.


Donald "C-Note" Hooker, who was once referred to as, "the world's most prolific prison artist," is a client of Silicon Valley Fine Art and Real Estate Broker Anna D. Smith. His Works have changed lives, saved lives, raised millions of dollars for rehabilitation and restoration, made history in the fashion world, and have appeared in murals and on billboards. C-Note is a poet, playwright, performing artist, award-winning Visual artist, and The King of Prison Hip Hop. His works have either been exhibited, recited, performed, or sold, from Alcatraz to Berlin, and artworks are extremely rare to acquire as a result of his imprisonment.


CHANGED LIVES:
In the fall of 2015, C-Note’s role as Money Mike in his semi-autobiographical play "Birth of a Salesman," and the opening act to the play "Redemption in Our State of Blues," performed at the California State Prison, Los Angeles County (CSP-LAC), led to a four day run and an encore run of "Redemption" during the winter of 2015. It in turn led to “BREAK IT TO MAKE IT (BITMI): Busting Barriers for the Incarcerated Project, Los Angeles, California.” A first-in-the-nation public-private funded prison reentry project. BITMI provides two years of free housing from the Los Angeles Mission, two years of free education from Los Angeles City College, and participation in the jails to jobs program of actual paid theatrical work with the theater group The Strindberg Laboratory.


In a December 2015, letter written by Republican, California Assemblyman Tom Lackey of the 36 District addressed to Michael Berman of The Steinberg Laboratory, “I was curious and pressed by the outstanding acapella vocals, the humor of Money Mike, and the literary skills and powerful delivery of the Poet. I was reminded that there is great potential for all men to be a viable part of our culture.”


Three-years later in 2018, Secretary of the California Department of Corrections and Rehabilitation Scott Kernan endorsed in writing the CDCR’s continued partnership with the BITMI program; and in a 2021 interview, Co-director of the play "Destiny Is The Journey," Nicole Abbink shared her story of putting on a production with actors in the BITMI program.


In 2015, The Strindberg Laboratory founders had never worked inside of a prison. They were assigned the prison’s most violent prison yard and had a hostile work environment from prison administrators and guards who were unaccustomed to observing these kinds of prisoners involved in rehabilitation services. But for C-Note’s leadership and artistic prowess, there never would have been encore performances to inspire a public-private partnership to create the innovative prisoner re-entry service known as BITMI. ln all likelihood, there never would have been a first run of their play "Redemption in Our State of Blues."


SAVED LIVES:
In 2017, Category 5 Hurricane Harvey struck the Gulf Coast of Texas. It prompted C-Note to create one of his most disseminated Works as a Public Service Announcement, "During the Flood." In 2019, several individuals and grassroots organizations used "During the Flood" as a Public Service Announcement to evacuate prisons in the path of the Category 5 Hurricane Dorian.


In 2021, several individuals and grassroots organizations used "During the Flood" as a Public Service Announcement to evacuate prisons in the path of the Category 4 Hurricane Ida.


RAISED MILLIONS:
In 2018, C-Note created the paintoem (painting + poem) "Today We Are Sisters." The digital work was created to raise awareness of the 150 forced sterilizations in California’s women prisons from 2006 – 2010, and the lack of reparations to the prisoner victims. The painting and poem tells of a truce between women who are Pro-Life, with women who are Pro-choice, to lend their combined strengths to end forced sterilizations of women prisoners.


While other individuals and organizations were involved in this advocacy, it wasn’t until the release of "Free Virtual Art Exhibition (1-Artist; 1-Subject; 21-Works)," which concluded with "Today We Are Sisters" in February of 2021, that in April of 2021, California legislative committees finally acquiesced to the lobbying for reparations to California women prisoners who were forcibly sterilized. AB 1007 Forced or Involuntary Sterilization Compensation Program (2021-2022) provides $7.5 million in reparations to anyone who was forcibly sterilized by the State. It was the first time prisoners were included for reparations in California’s forced sterilization budget.


MADE HISTORY IN FASHION WORLD:
In 2019 – 2020, C-Note worked with Makenzie Stiles, a 4th year undergrad Fashion designer student at the Columbus College of Art and Design for her thesis fashion line "Mercy." It was the first time in the 143-year-old history of Columbus College of Art and Design, a private academic institution, that a student created a fashion line with Prison art as a part of its design. The Covid-19 lockdown health restrictions in the spring of 2020 prevented the "2020 CCAD Fashion Show," which would have led to a global first in the 100-year-plus history of the Catwalk, models walking the Runway in clothes designed with Prison art.


FIRST IN PRISON ART HISTORY:
"C-Note 'they call him the Billboard Banksy,'" were the words next to his 2017 artwork "Incarceration Nation" on an Artists' Billboard high in the sky. Curated by Silicon Valley Fine Art and Real Estate Broker Anna D. Smith, "Look Up!" made Prison art history by featuring an actual prisoner's artwork on a billboard. However, this was not just any work of art, but "Incarceration Nation," America's premier work of art on mass incarceration.

THE KING OF PRISON HIP HOP:
On the morning of Super Bowl LVI in 2022, International Media Hip Hop Scholar Kim Dankoor of the Netherlands interviewed The King of Prison Hip Hop to discuss his art, the relationship between prison culture and Hip Hop culture, and why rap music should not be blamed for crime among youth. Kim Dankoor chops it up with C-Note, the king of prison Hip Hop! | YouTube

Besides Dankoor, C-Note has been featured in "Da Real Hip Hop News" on whether Nas predictions on the death of Hip Hop was real; in "Muzique Magazine" for stating that Megan Thee Stallion slayed the male rappers in C-Note's September 2020 article after the 36th annual MTV Video Music Awards where Megan Thee Stallion won best hip-hop video for "Savage"; his 2020 interview in "Hood Critic Magazine," and soon cover feature in the special Artivist Issue of "International Music Magazine."


PRISON POET:
While in prison, C-Note's poetry has touched listeners and readers in incomparable ways, at funerals, coffeehouses, art exhibitions, in print, and online. In 2016, C-Note was asked to create poetry around some of his artwork being exhibited at the "Escaping Time, Prisoner Art Exhibit," on Governors Island, New York City, July 26, 2016 - October 2, 2016. This request would eventually inspire the creation of Paintoems, painting + poem.

“I had found that Prison art exhibitions were not solely about the visual arts. There was always some literary component to it," states C-Note. "Be it creative writing, poetry, or small plays. So the curators who were putting on these exhibits equally felt, having the public hear in their own words, the prisoners' voices, greatly enriched their Prison art exhibitions. Then there are the prisoner publications, which can be newsletters, newspapers, or magazines. They also in their publications want to publish, preferably, politically inspired drawings, paintings, or poems. So in 2016, I came up with the idea, let’s put them together. Let’s create vignettes of poems inspired by paintings, or paintings/drawings inspired by poems; package them together, and give them to the public without ever getting our expressed written permission to do so. So now, a curator can just download from the internet, one of these paintoems, and enlarge it to whatever size they choose, and use this combination of painting + poem as part of their exhibit. Publishers, or anyone else, can use these paintoems however they want. We have one caveat, they can only be used as long as the artist or artists are acknowledged. When these works are published they always contain the artist's name. Oftentimes it’s two different artists, because one has contributed to the visual, the other the literal."

In February of 2020, for the "30th Annual Celebration of African American Poets and Their Poetry," C-Note created an original work entitled "Journey to Afrofuturism." It was recited at the event. The event had two themes, a national and local. One was for the 2020 national theme of the Association for the Study of African American Life and History (ASLAAH), the other was for the "400 Years of California, African American History." Upon research, C-Note had discovered that Spanish conquistador, and Governor of Mexico, Hernán Cortés, named California after a Black woman, the Califia to the land of Black women. The poem "Journey to Afrofuturism" brings back the Califia to our current times, as the nursemaid to the Afrofuturism movement.

When C-Note found out his poem was going to be a part of a book that will be covering the 30 years of the African American poetry event, he created a color drawing to visually support the poem. "Speculative City Magazine" paid C-Note for the rights to these works for one year to be published in their Winter of 2020, Issue #10, Afrofuturism.

In January of 2021, Charles Payseur of "Quick Sip Reviews," reviewed the six Works in Speculative City Magazine's Winter of 2020, Issue #10, Afrofuturism. In his review of "Journey to Afrofuturism," Payseur notes, "The poem to me feels like a celebration of scholarship and of art to reach back and make connections, to find afrofuturism waiting in all times, in all places."


On October 14th, 2021, the University of California, Santa Cruz (UCSC), held a Zoom event, "Afrofuturism Then and Now." The event was the inaugural 2021 - 2022 Academic Year Global discussion and performances on what Afrofuturism means and how it manifests in cultural practices. The Zoom call panelists consisted of speakers in diverse locations such as the Congo in Central Africa, Burkina Faso in West Africa, and several cities in the Northern California Bay Area in the United States. The event concluded with Hip Hop artist and Hip Hop Congress Board Chairman, Rahman Jamaal exhibiting and reciting C-Note's artwork and poem "Journey to Afrofuturism."


In 2022, author of "What Comes After," JoAnne Tompkins, who is a participant in PEN America's Prison Writing Mentor Program had read "Journey to Afrofuturism" through the program and noted, "I appreciate this poem as an ode to the search for Homeland, the ways we can be misled in our search, and the power of female energy. I was particularly drawn to the images of prehistoric icons: a saber tooth scepter and Mammoth wool which creates a sense of longing that predates any particular life. I also was taken by the imagery of the Earth's oldest and tallest trees and the blue whales, and the poem's female protagonist seeking to nurture the larger Earth and other creatures."


CYBER MONDAY DEAL:
In 2010, Cyber Monday surpassed Black Friday as the biggest shopping day of the year. In the US, it has gone from obscurity to the holiday season's highest-grossing shopping day. Silicon Valley Fine Art and Real Estate Broker Anna D. Smith will be offering patrons to her website who purchase a wall art print the option to receive, upon their request, an exclusive, handwritten, signed greeting card by C-Note.

If one is not familiar with the American prison system, getting artistic items out of the prisons can be very difficult. "Apokaluptein:16389067" (2010 - 2013), a vast 39-panel surreal landscape mural on contraband prison sheets by Jesse Krimes, had to be smuggled out of the prison. It wasn't until after Anna Delvey was released that her originals became available.

Considered to be the most important Emerging artist in the last 5 years, C-Note has received International recognition in the "London Daily Post," the "Middle East Headlines," The Inter Press Service (IPS)," as well as domestically, in "The Good Men Project," "eNews 2.0," and "People." Ownership of C-Note's autograph could be as significant an asset, as coming into possession of an autograph by an Emerging artist Basquiat or Banksy.

For inquiries or corrections to Press Releases, please reach out to EIN Presswire.
✕
× Close Ad