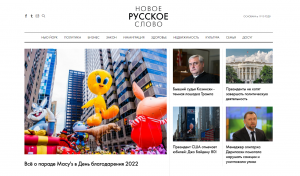 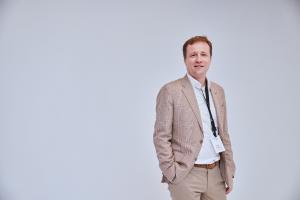 NEW YORK, UNITED STATES, November 24, 2022 /EINPresswire.com/ -- After a long hiatus, America’s premier Russian-language newspaper makes its big comeback this year! For a century, Novoe Russkoe Slovo was there to inform America's Russian-speaking community about events in the motherland and beyond. Now, it's back and better than ever in a modernized, online format. It's been revived under new ownership by Yury Mosha, an American businessman with Russian roots.

If this name is new to you, read below to find out more about the newspaper that enriched the minds of numerous generations of Russian Americans throughout the twentieth century.
A Brief History of the Publication
Founded in 1910, the weekly newspaper was the first news source that Russian emigrants in New York City could read in their native language. Publishers made their headquarters in Manhattan's Lower East Side, home to one of America's largest Russian communities. It quickly grew in popularity and, in 1913, they published new editions daily.

The newspaper aligned with the democratic views of its publishers and often ran contrary to the views of the Russian government back home. These sentiments were shared widely among the Russian community living in the United States at the time.

In the early days, the editors took a harsh stance against the tsar and voiced impassioned support for communism and change in Russia. However, later, after the 1917 revolution, the paper espoused strong anti-communist views to its readership. This change was marked by the transition from the paper’s original title, “Russkoe Slovo” to “Novoe Russkoe Slovo” as an attempt to distance itself from the newspaper’s previous ideological alignments.

Over the following century, Novoe Russkoe Slovo brought the news from Russia and beyond to Russian-speaking ex-pats in the USA. It helped update the community on events such as the Polish-Soviet war, the Greco-Turkish war, and the 1920s Typhus epidemic back in their homeland.

Its readership flourished in this period. In 1921, the paper circulated over 30 thousand copies. This number fluctuated over the decades, but a count in 2006 estimated 150 thousand copies in circulation. Around this time, partnerships in Moscow led to the newspaper publishing in Russia and other post-Soviet countries for a short time.

Throughout its lifetime, the newspaper served as a home to the writings of the most important Russian writers and journalists based in America and Europe, including the likes of George Grebenstchikoff, Aleksei Fovitsky, and Arkady Averchenko. These writers used the paper as a platform for commentary and informing their curious Russian audience on events and big changes in the motherland.

Eventually, the newspaper developed into a more inclusive platform similar to other American newspapers, complete with weekly columns, film reviews, and segments featuring authors in Russia. These developments came over the century due to the generational turnover in the writing staff. The first contributors were emigrés and refugees from the revolution. Down the road, first and second-generation Russian immigrants brought new perspectives and ultimately updated the newspaper's format.

By 2009, as with many publications worldwide, Novoe Russkoe Slovo struggled to stay afloat. Advertisers and top journalists began leaving press publications in favor of the fast-growing online news media frenzy. This dealt a major blow to the publishers, as they struggled to keep the newspaper profitable. First, they downsized to a weekly publication as part of the New York Times which translated selected articles into Russian.

In 2010, there was a bittersweet celebration of Novoe Russkoe Slovo’s 100th anniversary. A few months later, in November, publisher’s announced the newspaper’s suspension.
The Rebirth- What to Expect
2010 isn’t the end of Novoe Russkoe Slovo’s story. In the decade after the end of circulation, the internet has breathed new life into news media. Rather than close their doors, newspaper publishers adapted and transitioned their companies to online-oriented platforms.

We plan to do just that! Get ready for the new and improved Novoe Russkoe Slovo, complete with an online platform and social media. The new website, however, has a new mission: to keep our New York Russian-speaking public informed of news and happenings in the city, plus major events across the USA.

In an age of disinformation and increasingly politicized media outlets, our news is aggregated from a variety of sources worldwide to provide a clear, unbiased look at current events. Our contributors' motto can be summarized in one word: Transparency. 2022's Novoe Russkoe Slovo presents its stories as honestly as possible and with no room for agenda.

Our website and Telegram channel bring you breaking stories as they happen. Stay in the know about catastrophes, conflicts, and political happenings unfolding with our live updates.

The new platform also gives a voice to reviewers and cultural journalists who provide insight into noteworthy artists, musicians, and writers. Get the latest news about US elections, Broadway musicals, new local businesses, and much more!

Novoe Russkoe Slovo has already launched its new website and is making daily publications. We pledge to keep America's Russian-speaking community informed with our coverage of events in the USA. We can now do this better than before thanks to our online platform, providing real-time updates on happenings everywhere. Visit our website nrslovo.com and find us on Facebook, Telegram, and Instagram to stay in the loop!

For inquiries or corrections to Press Releases, please reach out to EIN Presswire.
✕
× Close Ad